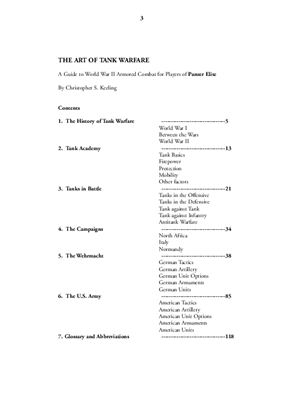 A Guide to World War II Armored Combat for Players of Panzer Elite.
This book is designed as both a historical reference for the armored warfare enthusiasts among us, and as a primer for the novice. The history and development of the tank, covered in the first chapter, is provided in order to give some background on the state of armored vehicle technology in World War II. The second chapter gives much more specific information on the current technologies and how they were used in combat. Chapter three covers the tactics associated with armored fighting vehicles in different roles and against different types of targets. Chapter four is a supplement to the overall historical guide, detailing the historical campaigns included with the game (for in-depth data on the specific scenarios, see the Gameplay Manual, chapter seven). Reference data for all of the units in Panzer Elite is provided in chapters five and six. Finally, a glossary of armored vehicle terminology and abbreviations is given in chapter seven. Before you begin play, we recommend that you should at least read chapters two and three. Contents:
The History of Tank Warfare.
World War I.
Between the Wars.
World War II.
Tank Academy.
Tank Basics.
Firepower.
Protection.
Mobility.
Other factors.
Tanks in Battle.
Tanks in the Offensive.
Tanks in the Defensive.
Tank against Tank.
Tank against Infantry.
Antitank Warfare.
The Campaigns.
North Africa.
taly.
Normandy.
The Wehrmacht.
German Tactics.
German Artillery.
German Unit Options.
German Armaments.
German Units.
The U.S. Army.
American Tactics.
American Artillery.
American Unit Options.
American Armaments.
American Units.
Glossary and Abbreviations.
Похожие разделы