Mann Michael. The Dark Side of Democracy. Explaining Ethnic Cleansing 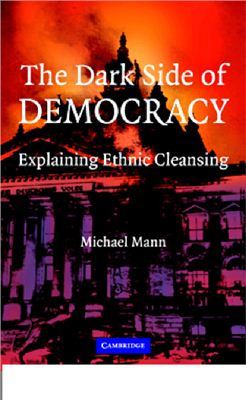 This book presents a new theory of ethnic cleansing based on the most terrible cases (colonial genocides, Armenia, the Nazi Holocaust, Cambodia, Yugoslavia, Rwanda) and cases of lesser violence (early mode Europe, contemporary India, and Indonesia). Murderous cleansing is mode, 'the dark side of democracy.' It results where the demos (democracy) is confused with the ethnos (the ethnic group). Danger arises where two rival ethno-national movements each claims 'its own' state over the same territory. Conflict escalates where either the weaker side fights rather than submit because of aid form outside, or the stronger side believes it can deploy sudden, overwhelming force. But the state must also have factionalized and radicalized by exteal pressures like wars. Premeditation is rare, since perpetrators feel 'forced' into escalation when their milder plans are frustrated. Escalation is not simply the work of 'evil elites' or 'primitive peoples.' It results from complex interactions between leaders, militants, and 'core constituencies' of ethno-nationalism. Understanding this complex process helps us devise policies to avoid ethnic cleansing in the future.
Похожие разделы
Смотрите также

Altes Korthals A. The Forgotten Battle: Overloon and the Maas Salient, 1944-45 (ENG)

Castle Books, 2002 - 226 p. ISBN10: 0785814205 ISBN13: 9780785814207 "The Forgotten Battle" has remained alive and vivid in the mind of its thousands of participants. This necessary and brilliantly crafted work examines the battles of Overloon and Maas Salient, the "other" side of WWII in Europe-a bloody slugging match between equally skilled opponents that comprised the reality of the "broad front" strategy.

New-York, Oxford: Berghahn Books, 2008. - 480 p. In 1944, Raphael Lemkin coined the term genocide to describe a foreign occupation that destroyed or permanently crippled a subject population. In this tradition, Empire, Colony, Genocide embeds genocide in the epochal geopolitical transformations of the past 500 years: the European colonization of the globe, the rise and fall of the continental land empires, violent decolonization, and the formati...

Статья
Bodmin: Mpg books Ltd, 1998. - 296 p. Essays issuing from the World History Conference held at Wesleyan University on March 25-26, 1994. An early reviwer said this of the volume: "We have here a very valuable collection that must help anyone to clarify what world history is. This is by no means a hegemonic book, where we end up being told how to 'do' world history. To the contrary, the collection is particularly useful because it represents so m...

Hailed as the most extensive photographic record of the naval side of World War II ever produced, this book is a must for anyone interested in naval history. From Robert Capa's images of the mayhem on Omaha Beach to the amateur photography of a serviceman on board a destroyer, the collection offers a moving and informative look at all theaters. The introduction of the 35-mm camera and the easing of censorship allowed photographers to get close to...