Masterminds of Programming: Conversations with the Creators of Major Programming Languages 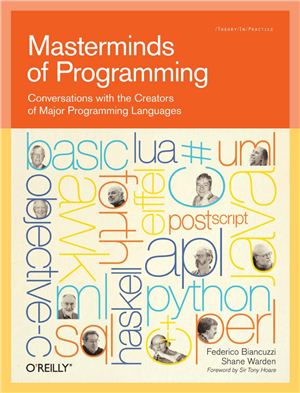 If you're interested in the people whose vision and hard work helped shape the computer industry, you'll find Masterminds of Programming fascinating.
Похожие разделы
Смотрите также

Издательство Springer, 2008, -830 pp. As we move toward the 21st century, the techniques, tools, technologies, and subject matter of applications development are changing radically. Globalization of the work place is impacting IS development as well, by pressuring organizations to strive for competitive advantage through automation, among other methods. Strategic IS, reusable designs, downsizing, right-sizing, multimedia databases, and reusable...

Издательство Wordware Publishing, 2006, -471 pp. Design patterns have been around for quite a few years. They were originally created by the Gang of Four (Erich Gamma, Richard Helm, Ralph Johnson, and John Vlissides), which is responsible for formalizing the accepted design patterns we use today. Their use, while questioned and argued over by different programming schools of thought, has generally been accepted as "best practices" within the dev...

An introductory course on Software Engineering remains one of the hardest subjects to teach largely because of the wide range of topics the area encompasses. I have believed for some time that we often tend to teach too many concepts and topics in an introductory course resulting in shallow knowledge and little insight on application of these concepts. And Software Engineering is finally about application of concepts to efficiently engineer good...

Springer, 2011. - 267 p. Most textbooks on modern heuristics provide the reader with detailed descriptions of the functionality of single examples like genetic algorithms, genetic programming, tabu search, simulated annealing, and others, but fail to teach the underlying concepts behind these different approaches. The author takes a different approach in this textbook by focusing on the users' needs and answering three fundamental questions: Fir...