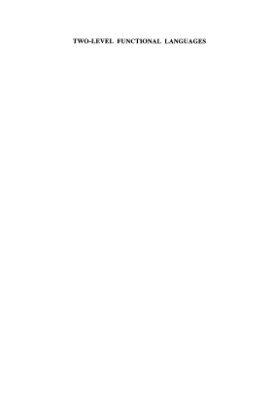 The subject area of this book conces the implementation of functional languages. The main perspective is that part of the implementation process amounts to
making computer science concepts explicit
in order to facilitate the application, and the development, of general frameworks for program analysis and code generation.
This is illustrated on a specimen functional language patteed after the A-calculus:
Types are made explicit in Chapter_2 by means of a Hindley/Milner/Damas type analysis.
Binding times are made explicit in Chapter_3 using an approach inspired by the one for type analysis. The binding times of chief interest are compile-time and run-time.
Combinators are made explicit in Chapter_4 but only for run-time computations whereas the compile-time computations retain their A-calculus syntax.
The advantages of this approach are illustrated in the remainder of the book where the emphasis also shifts from a 'syntactic perspective' to a more 'semantic perspective':
A notion of parameterized semantics is defined in Chapter_5 and this allows a wide variety of semantics to be given.
It is illustrated for code generation in Chapter Six. Code is generated for a structured abstract machine and the correctness proof exploits Kripke-logical relations and layered predicates.
It is illustrated for abstract interpretation in Chapter Seven. We generalize Wadler's strictness analysis to general lists, show the correctness using logical relations, and illustrate the similarity between tensor products and Wadler's case analysis.
Finally, Chapter_8 discusses possible ways of extending the development. This includes the use of abstract interpretation to obtain an improved code generation that may still be proved correct. We also illustrate the role of the mixed A-calculus and combinatory logic as a metalanguage for denotational semantics; this allows a systematic approach to compiler generation from semantic specifications.
This book is intended for researchers and for students who already have some formal training. Much of the work reported here has been documented elsewhere in the scientific literature and we have therefore aimed at a style of exposition where we concentrate on the main insights and methods, including proofs and proof techniques, but where we feel free to refer to the literature for technically complex generalizations and details of tedious proofs. To facilitate this, we provide bibliographic notes covering variations of the technical development. Our notation is mostly standard but we find ‘?' a more readable notation for 'partial functions' than '—'.

Издательство Birkh?user, 1993, -424 pp. The goal of this monograph is to give a concrete approach to the semantics of sequential programming languages, with application to the design and implementation of programming languages. Just as machines do not manipulate numbers, but representations of numbers, we do not present sets and functions, but concrete representations of these sets and functions. The motivation behind our constructions is to ens...

Clojure is a dynamic language for the Java Virtual Machine, with a compelling combination of features: Clojure is elegant. Clojure's clean, careful design lets you write programs that get right to the essence of a problem, without a lot of clutter and ceremony. Clojure is Lisp reloaded. Clojure has the power inherent in Lisp, but is not constrained by the history of Lisp. Clojure is a functional language. Data structures are immutable, and funct...

Hughes J. The Design of a Pretty-printer Library

When a C programmer needs an efficient data structure for a particular problem, he or she can often simply look one up in any of a number of good textbooks or handbooks. Unfortunately, programmers in functional languages such as Standard ML or Haskell do not have this luxury. Although some data structures designed for imperative languages such as C can be quite easily adapted to a functional setting, most cannot, usually because they depend in cr...