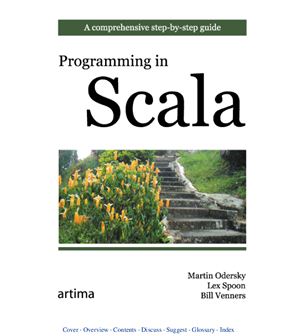 Programming in Scala is the definitive book on Scala, the new language for the Java Platform that blends object-oriented and functional programming concepts into a unique and powerful tool for developers. Coauthored by the designer of the Scala language, this authoritative book will teach you, one step at a time, the Scala language and the ideas behind it. The book is carefully crafted to help you lea. The first few chapters will give you enough of the basics that you can already start using Scala for simple tasks. The entire book is organized so that each new concept builds on concepts that came before - a series of steps that promises to help you master the Scala language and the important ideas about programming that Scala embodies. A comprehensive tutorial and reference for Scala, this book covers the entire language and important libraries.
Похожие разделы
Смотрите также

Издательство Birkh?user, 1993, -424 pp. The goal of this monograph is to give a concrete approach to the semantics of sequential programming languages, with application to the design and implementation of programming languages. Just as machines do not manipulate numbers, but representations of numbers, we do not present sets and functions, but concrete representations of these sets and functions. The motivation behind our constructions is to ens...

Paperback: 200 pages. Publisher: Apress; 1 edition (May 15, 2009). Language: English. ISBN-10: 1430224215. ISBN-13: 978-1430224211. The Definitive Guide to Lift will educate you about Lift, a great framework for building compelling web applications. Lift is designed to make powerful techniques easily accessible, while keeping the overall framework simple and flexible. Lift makes it fun to develop because it lets you focus on the interesting parts...

Michael Fogus, Chris Houser. The Joy of Clojure: Thinking the Clojure. Manning Publications, 2011. - 360 p. - ISBN: 1935182641 Clojure is a dynamic programming language that targets the Java Virtual Machine. The Joy of Clojure goes beyond the syntax, and shows how to write fluent, idiomatic Clojure code. Readers will learn to approach programming challenges from a Functional perspective and master the Lisp techniques that make Clojure so elegant...