Schaffner K.F. Discovery and Explanation in Biology and Medicine 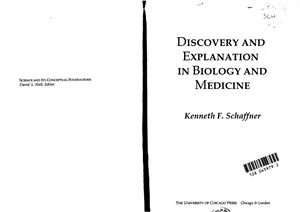 Kenneth F. Schaffner compares the practice of biological and medical research and shows how traditional topics in philosophy of science—such as the nature of theories and of explanation—can illuminate the life sciences. While Schaffner pays some attention to the conceptual questions of evolutionary biology, his chief focus is on the examples that immunology, human genetics, neuroscience, and inteal medicine provide for examinations of the way scientists develop, examine, test, and apply theories.

Although traditional philosophy of science has regarded scientific discovery—the questions of creativity in science—as a subject for psychological rather than philosophical study, Schaffner argues that recent work in cognitive science and artificial intelligence enables researchers to rationally analyze the nature of discovery. As a philosopher of science who holds an M.D., he has examined biomedical work from the inside and uses detailed examples from the entire range of the life sciences to support the semantic approach to scientific theories, addressing whether there are "laws" in the life sciences as there are in the physical sciences. Schaffner's novel use of philosophical tools to deal with scientific research in all of its complexity provides a distinctive angle on basic questions of scientific evaluation and explanation.
Похожие разделы
Смотрите также

Статья
Nova Science Publishers, 2011, 376 pages This continuing series gathers and presents original research results on the leading edge of medicine and biology. Each article has been carefully selected in an attempt to present substantial topical data across a broad spectrum. Topics discussed in this compilation include the cell cycle alteration in down syndrome; TLR agonists as immune adjuvants; heart rate variability in eating disorders; current t...

Benjamin Cummings, 2011. - 544 pages. 12th Edition Explorations in Basic Biology is a self-contained laboratory manual designed for one- or two-semester introductory biology courses for non-biology and mixed biology majors. The exercises are appropriate for three-hour laboratory sessions, but are also adaptable to a two-hour laboratory format. Ideal for students with little hands-on science laboratory experience, this student-friendly text p...

Wiley, 2010.(2nd Edition) - An updated edition of the ultimate guide to understanding biology/ Ever wondered how the food you eat becomes the energy your body needs to keep going? The theory of evolution says that humans and chimps descended from a common ancestor, but does it tell us how and why? We humans are insatiably curious creatures who can't help wondering how things work — starting with our own bodies. Wouldn't it be great to have a sing...

McGraw-Hill Professional, 2003. - 401 pages. This book is for people who want to get acquainted with the concepts of basic biology without taking a formal course. It can serve as a supplemental text in a classroom, tutored, or home-schooling environment. It should also be useful for career changers who need to refresh their knowledge of the subject. I recommend that you start at the beginning of this book and go straight through. This book seek...

Hungry Minds, 2001. - 419 p. - The Advanced Placement Program is designed to encourage students to take challenging courses in high school and receive college credit for their efforts. Many high schools offer classes especially designed for the AP program, but any course or program of study, whatever it is called, is appropriate if the content is college level. This book helps you to prepare for the Advanced Placement Examination in Biology. A ma...

McGraw-Hill, 2011. - 1406 p. - This edition continues the evolution of the new Raven & Johnson’s Biology. The author team is committed to continually improving the text, keeping the student and learning foremost. We have an improved design and updated pedagogical features to complement the new art program and completely revised content of the transformative eighth edition of Biology. This latest edition of the text maintains the clear, access...

Wiley, 2006. - 954 pages. The growth of the environmental sciences has greatly expanded the scope of biological disciplines today's engineers have to deal with. Yet, despite its fundamental importance, the full breadth of biology has been given short shrift in most environmental engineering and science courses. Filling this gap in the professional literature, Environmental Biology for Engineers and Scientists introduces students of chemistry, p...