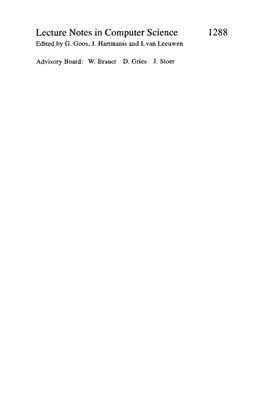 Database research in the last decade has focused on developing support for so-called non-standard applications. One important area is the representation of spatial information, needed, for example, in Geographic Information Systems. Database systems extended by capabilities for managing spatial information are called spatial database systems. This book contributes to the design and implementation of geometry in spatial database systems.
The fundamental question in a spatial database is how to represent geometry. Attempts to use a relational database with the standard set of data types (integer, real, string, etc.) had serious shortcomings. Representing a simple polygon in a table of x and y coordinates is conceptually inadequate, leads to complex queries and is, last but not least, hopelessly inefficient. To determine which polygon in the database contains a given point, it is first necessary to reconstruct the polygon from the set of tuples representing it.
The fundamental idea is to introduce abstract data types for spatial objects with the corresponding operations. For example, in two dimensions, there may be types to represent points, (poly-)lines, or polygons in the plane with operations such as testing whether two polygons overlap or whether a point lies within a polygon, computing the intersection of a line and a polygon, etc. The relational model, or in fact any DBMS data model, can be extended by such types in the role of attribute data types. Hence we may now have, for example, a relation describing countries with an attribute of type polygon representing the country area.
This leads directly to the question how geometric constructions, as defined by the Euclidean axioms, can be represented with the finite approximations available in a computer system. Several systems of spatial data types (or spatial algebras) had been proposed in the literature, but these formal designs were based on exact Euclidean geometry. For example, one assumed that the intersection point of two line segments can be computed precisely. However, computers work with finite representations and can represent coordinates only approximately. It is usually necessary to round the coordinates of the intersection point to the nearest gridpoint where the grid corresponds to the resolution of the number system used. This introduces numerous types of errors, e.g., a subsequent test will tell you that the intersection point does not lie on either of the two line segments that created it in the first place! These errors were not only known theoretically, but hounded the daily practice of Geographic Information Systems: the most important "overlay" function of most commercial sytems failed sometimes even for simple inputs. It became crucial to find a solution for a robust implementation of geometric algorithms.
The essential new idea developed in this thesis work was not to base the design of a spatial algebra directly on Euclidean geometry but to use an underlying discrete basis, a so-called realm. A realm is a set of points and line segments defined over a discrete grid, with the additional property that no two realm segments intersect (except at their end points), and that no realm point lies on the interior of a realm segment. In other words, a realm is a planar graph embedded into the plane. It can be represented with finite coordinate values. A realm is intended to represent the entire geometry of an application, regardless of how the application is structured into different classes of geometric objects. The values of spatial data types are composed of points and line segments existing in the underlying realm. New geometries entered into the database are first put into the realm - so any intersections are computed at this level - and then propagated to the spatial data type values defined over the realm in the database. As a result, one can define a spatial algebra whose operations obey the algebraic laws that one would expect not only in theory, but also in the implementation. For example, computing the overlay of parcels with soil types gives the same result as the overlay of soil types over parcels. This fundamental law is generally violated in today's Geographic Information System software.
This book develops this strategy in detail. It describes the concept of realm and shows how updates can be performed in the realm layer so that the realm properties are maintained. This results in the design of the ROSE algebra, a comprehensive and coherent system of spatial types that can be implemented in (extensible) database systems without incurring the risk of computational problems due to the finiteness of computer algebra.
The algorithms and data structures designed are very efficient, in many cases even more efficient than the corresponding standard, floating point based algorithm. This is the rare case where the correct solution is also more efficient. The algorithms have been implemented and tested. They are available as a software package and we hope that they can be integrated by the industry into Geographic Information Systems. This book describes all the pieces of the design and implementation in a coherent manner, and should be a valuable resource for industry to help transfer these concepts into practice.

John Wiley & Sons, Inc., 2009. – 314 pages. Location theory is rooted in the disciplines of geography, engineering, mathematics, and economics. The science of ‘‘where should it be’’ is truly multidisciplinary and continues to be of interest to practitioners and researchers alike representing a variety of ?elds, ranging from business to operations research to computer science. We consider Geographic information systems (GIS) and optimization t...

Publisher: Pragmatic Bookshelf Publication: 2008, English ISBN: 9781934356067 Pages: 368 Desktop GIS explores the world of Open Source GIS software and provides a guide to navigate the many options available. Discover what kind of GIS user you are and lay the foundation to evaluate the options and decide what software is best for you. Desktop GIS examines the challenges associated with assembling and using an OSGIS toolkit. You'll find strategie...

El-Rabbany A. Introduction to GPS

2002 ARTECH HOUSE, INC. The book also addresses more recent issues such as the modernization of GPS and the proposed European satellite navigation system known as Galileo. As well, the book emphasizes GPS applications, which will bene fit not only the GPS users but also the GPS marketing and sales personnel. Chapter 1 of the book introduces the GPS system and its components. Chapter 2 examines the GPS signal structure, the GPS modernization, and...

Artech House Publishers, 2006. - 302 Pages. Geographic information systems (GIS) – a central repository of geographic data collected from various sources, including satellites and GPS is emerging as one of the most intriguing and promising high-tech fields. Today, many technical, managerial, engineering, and academic positions require GIS skills, and this easy-to-understand resource answers the call. The book examines and explains all of the cri...

Энциклопедия
Издательство Springer, 2008, -1391 pp. The publication of a definitive Encyclopedia of GIS that lays out many of the computer science/mathematics foundations of the field is a major event, the culmination of a half century of development. I was part of the earliest stirrings in the mid-1950s. A small group of geography graduate students at the University of Washington, William Garrison’s space cadets, began to assemble what became the foundation...

Издательство Springer, 1997, -297 pp. This volume aims to bring together the two lines of research whose interaction promises to have significant practical impact in the near future: the application-oriented discipline of Geographic Information Systems (GIS) and the technical discipline of geometric computation, or in particular, geometric algorithms and spatial data structures. GIS are complex systems consisting of a database part and a spatial...