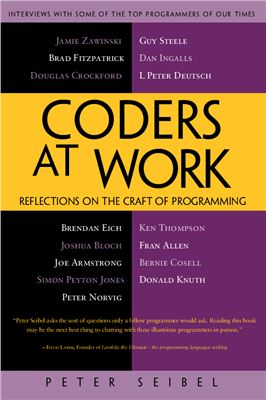 Manning Publications, 2011. - 332 p. Many software projects fail unnecessarily because of unclear objectives, redundant and unproductive work, cost overruns, and a host of other avoidable process problems. In response, agile processes and lightweight tooling have begun to replace traditional engineering processes throughout the development lifecycle. Agile ALM is a guide for Java developers who want to integrate flexible agile practices and ligh...

IIBA. BABOK - The Guide to the Business Analysis Body of Knowledge

Version 2.0 Framework, p.16. This document is intended to provide an overview of the framework developed for version 2.0 of the Business Analysis Body of Knowledge™ (BABOK™). Business analysis is the set of tasks and techniques used to work as a liaison among stakeholders in order to understand the structure, policies, and operations of an organization, and recommend solutions that enable the organization to achieve its goals. The BABOK is...

June 2010, p. 17. The purpose of this handbook is to provide Certified Business Analysis Professional™ (CBAP) applicants the information needed to understand the International Institute of Business Analysis (IIBA) organization and the process to become certified. IIBA is an independent non-profit professional association serving the growing field of Business Analysis. The IIBA mission includes the development and maintenance of standards for...