Sidharth B.G. The Thermodynamic Universe: Exploring the Limits of Physics 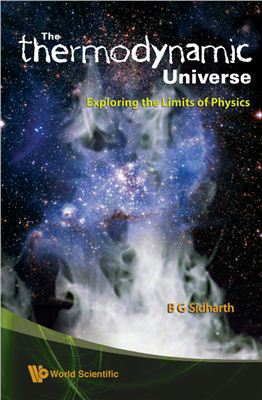 World Scientific Publishing, New Jersey, 2008, 293 pages
Presenting the new paradigm in fuzzy spacetime, this book is based on some 100 papers published in peer-reviewed jouals including Foundations of Physics, Nuovo Cimento and The Inteational Joual of Mode Physics (A&E), as well as two recently published books, The Chaotic Universe (Nova Science, New York) and The Universe of Fluctuations (Springer). The work had predicted correctly in advance epoch-tuing observations, for example, that the Universe is accelerating with a small cosmological constant driven by dark energy when the prevalent line of thinking was the exact opposite. Similarly, the prediction of a minimum thermodynamic residual energy in the Universe has also been realized more recently. Further to a unified description of gravitation and electromagnetism via fluctuations, several other features are presented in complete agreement with experiments, in sharp contrast to the present ideas which are neither verifiable nor disprovable.
Похожие разделы
Смотрите также

Энциклопедия
Иллюстрированная энциклопедия на английском языке. Encyclop?dia Britannica, Inc. , 2009 Jacob E. Safra. , 100стр. Contents: What Is the Universe? What Is in the Universe? The Solar System The Earth and the Moon Observing the Universe

8th Edition, W. H. Freeman and Company, 2008, 851 pages Known edition after edition for its state-of-the-science coverage, Universe breaks new ground in its Eighth Edition with added pedagogical support and pioneering media and supplements. It places the basics of astronomy and the process of science within the grasp of introductory students. Introducing Astronomy Knowing the Heavens Eclipses and the Motion of the Moon Gravitation and the Walt...

Springer-Verlag, Berlin, 2005, 441 pages Describes the branch of astronomy in which processes in the universe are investigated with experimental methods employed in particle-physics experiments. After a historical introduction the basics of elementary particles, Explains particle interactions and the relevant detection techniques, while modern aspects of astroparticle physics are described in a chapter on cosmology. Provides an orientation in th...

Cambridge University Press, 1998, 297 Pages What is the Universe made of? How old is it? How does a supernova explode? Can we detect black holes? And where do cosmic rays originate? This volume provides a comprehensive and pedagogical introduction to modern ideas and challenging problems in nuclear and particle astrophysics. Articles written by eight leading experts cover a wealth of exciting topics. Together, they present the Universe as a labo...

2nd Edition, Springer, 2011, 639 pages Exploring Ancient Skies brings together the methods of archaeology and the insights of modern astronomy to explore the science of astronomy as it was practiced in various cultures prior to the invention of the telescope. The book reviews an enormous and growing body of literature on the cultures of the ancient Mediterranean, the Far East, and the New World (particularly Mesoamerica), putting the ancient as...

Lockwood M. The Labyrinth of Time: Introducing the Universe

Oxfоrd Univеrsity Prеss, 2005, 405 pages Modern physics has revealed our knowledge of the universe as a much stranger place than we could have imagined. The puzzle at the center of our understanding of the universe is time. Michael Lockwood takes the reader on a fascinating journey into the nature of things. He investigates philosophical questions about the past, present, and future, our experience of time, and the possibility of time travel....

World Scientific Publishing Co., 2011, 591 pages Primordial Cosmology deals with one of the most puzzling and fascinating topics debated in modern physics - the nature of the Big Bang singularity. The authors provide a self-consistent and complete treatment of the very early Universe dynamics, passing through a concise discussion of the Standard Cosmological Model, a precise characterization of the role played by the theory of inflation, up to...

Moore P. Atlas of the Universe