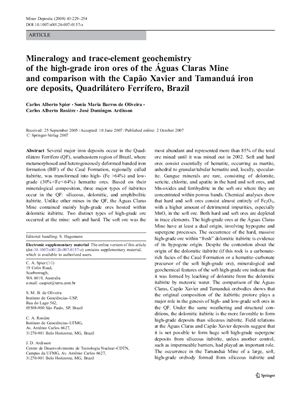 // Miner Deposita, 2008. № 43. 229–254 pp.
Several major iron deposits occur in the Quadril?tero Ferr?fero (QF), southeaste region of Brazil, where metamorphosed and heterogeneously deformed banded iron
formation (BIF) of the Cau? Formation, regionally called itabirite, was transformed into high- (Fe 64%) and lowgrade (30% Fe 64%) hematite ores. Based on their mineralogical composition, three major types of itabirites occur in the QF: siliceous, dolomitic, and amphibolitic itabirite. Unlike other mines in the QF, the ?guas Claras Mine contained mainly high-grade ores hosted within dolomitic itabirite. Two distinct types of high-grade ore occurred at the mine: soft and hard. The soft ore was the most abundant and represented more than 85% of the total ore mined until it was mined out in 2002. Soft and hard ores consist essentially of hematite, occurring as martite, anhedral to granular/tabular hematite and, locally, specularite.
Gangue minerals are rare, consisting of dolomite, sericite, chlorite, and apatite in the hard and soft ores, and Mn-oxides and ferrihydrite in the soft ore where they are concentrated within porous bands. Chemical analyses show that hard and soft ores consist almost entirely of Fe2O3, with a higher amount of detrimental impurities, especially MnO, in the soft ore. Both hard and soft ores are depleted in trace elements. The high-grade ores at the ?guas Claras Mine have at least a dual origin, involving hypogene and supergene processes. The occurrence of the hard, massive high-grade ore within fresh dolomitic itabirite is evidence of its hypogene origin. Despite the contention about the origin of the dolomitic itabirite (if this rock is a carbonaterich facies of the Cau? Formation or a hematite–carbonate precursor of the soft high-grade ore), mineralogical and geochemical features of the soft high-grade ore indicate that it was formed by leaching of dolomite from the dolomitic itabirite by meteoric water. The comparison of the ?guas Claras, Cap?o Xavier and Tamandu? orebodies shows that the original composition of the itabiritic protore plays a major role in the genesis of high- and low-grade soft ores in the QF. Under the same weathering and structural conditions, the dolomitic itabirite is the more favorable to form high-grade deposits than siliceous itabirite. Field relations at the ?guas Claras and Cap?o Xavier deposits suggest that it is not possible to form huge soft high-grade supergene deposits from siliceous itabirite, unless another control, such as impermeable barriers, had played an important role.
The occurrence in the Tamandu? Mine of a large, soft, high-grade orebody formed from siliceous itabirite and closely associated with hypogene hard ore suggests that large, soft, high-grade orebodies of the Quadril?tero Ferr?fero, which occur within siliceous itabirite, have a hypogene contribution in their formation.
Смотрите также

International Atomic Energy Agency, 2009. p. 117 Having comprehensive information on the worldwide uranium deposits is crucial for implementation of significant nuclear power programmes in the world, especially with the increasing interest in nuclear power and concerns about the supply of energy resources.

Kula Misra has met that challenge and produced a first-rate book that reviews the techniques employed in ore deposit research and summarize the geological and geochemical characteristics and origins of selected classes of metallic ore deposits. In a field that generates new data daily, Understanding Mineral Deposits is up-to-date useful. With this book he has succeeded in high-lighting the multidimensional nature of economic geology. It is also a...

Rasilainen, K. , Eilu, P. , Halkoaho, T. , Iljina, M. & Karinen, T.Geological Survey of Finland, Report of Investigation 180, 2010. 338 pages, 8 figures, 7 tables and 5 appendices. Most of the known platinum group element (PGE) resources in Finland are in contact- and reef-type deposits in 2.45 Ga mafic-ultramafic layered intrusions. These intrusions also have the potential to contain the majority of possibly existing, yet undiscovered, PGE...

Blackwell Publishing, 2004. Introduction to Ore-Forming Processes is the first senior undergraduate – postgraduate textbook to focus specifically on the multiplicity of geological processes that result in the formation of mineral deposits. Opens with an overview of magmatic ore-forming processes. Moves systematically through hydrothermal and sedimentary metallogenic environments, covering as it does the entire gamut of mineral deposit types, incl...