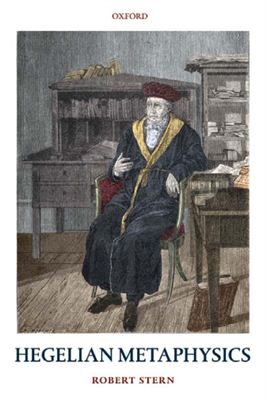 The great German idealist philosopher G. W. F. Hegel has exerted an immense influence on the development of philosophy from the early 19th century to the present. But the metaphysical aspects of his thought are still under-appreciated. In a series of essays Robert Ste traces the development of a distinctively Hegelian approach to metaphysics and certain central metaphysical issues. The book begins with an introduction that considers this theme as a whole, followed by a section of essays on Hegel himself. Ste then focuses on the way in which certain key metaphysical ideas in Hegel's system, such as his doctrine of the ‘concrete universal’ and his conception of truth, relate to the thinking of the British Idealists on the one hand, and the American Pragmatists on the other. The volume concludes by examining a critique of Hegel's metaphysical position from the perspective of the continental tradition, and in particular Gilles Deleuze.

Introduction: How is Hegelian Metaphysics Possible?
Hegel's Idealist Metaphysics
Hegel's Idealism
Did Hegel Hold an Identity Theory of Truth?
Hegel's Doppelsatz: A Neutral Reading
Hegel and the British Idealists
British Hegelianism: A Non-Metaphysical View?
Hegel, British Idealism, and the Curious Case of the Concrete Universal
Coherence as a Test for Truth
Hegel, Pragmatism, and Peirce
Hegel and Pragmatism
Peirce on Hegel: Nominalist or Realist?
Peirce, Hegel, and the Category of Secondness
Peirce, Hegel, and the Category of Firstness
James and Bradley on the Limits of Human Understanding
The Continental Critique of Hegel's Metaphysics
Individual Existence and the Philosophy of Difference

Cambridge University Press, 1995 - Philosophy - 404 pages Aristotle is one of the very greatest thinkers in the Western tradition, but also one of the most difficult. The contributors to this volume do not attempt to disguise the nature of that difficulty, but at the same time they offer a clear exposition of the central philosophical concerns in his work. Approaches and methods vary and the volume editor has not imposed any single interpretation...