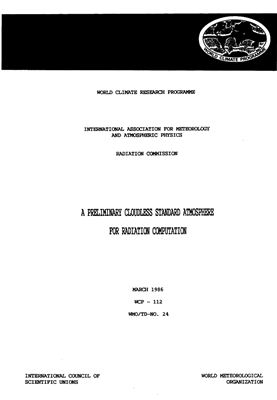 World Climate Research Programme, Inteational Association For Meteorology And Atmospheric Physics, Radiation Commission, 1986, WCP – 112, WMO/TD-No. 24, 60pp.
McClatchey R.A., Shettle E., Fenn R., et al.
For radiation computations there is a twofold demand for standardized models: First, to test and to intercompare radiation transfer algorithms, and Second, to compute the radiation terms for sensitivity studies in climate research. For the first purpose, the intercomparison of radiation computation schemes, a small number of mean and extreme atmospheric models, which need not even reflect realistic conditions, would be sufficient. For the second purpose models are desired which get as close as possible to natural states of the atmosphere.
The present report is an effort to provide the radiation community with cloudfree standard atmospheres for the first purpose, which are also realistic in so far as they reflect certain selected mean conditions. Thus the models presented here may be used in first approximation sensitivity studies. It is expected that these models will form the basis of more sophisticated models intended especially to implement cloudiness, and to make them more useful for climate sensitivity studies in the sense as requested by the JSC (JSC-1, 1980). With respect to these future extensions some ideas are outlined in this report which may stimulate the discussion among conceed scientific groups. Any feed-back with respect to future requirements and specifications would be welcomed by the Radiation Commission.
We would like to thank all colleagues who cooperated in the preparation of this document for their efforts and suggestions. Not all proposals received could yet be implemented since the objective for this report was to present a nucleus of minimum size with a potential for future augmentation and modification.

Brasseur G.P., Solomon S. Aeronomy of the Middle Atmosphere (Chemistry and Physics of the Stratosphere and Mesosphere)

Academic Press, 1980, 392 pages The book is divided into eight chapters. Chapter 1 introduces concepts, definitions, various basic radiation laws, and the fundamental equations for radiative transfer. Chapter 2 describes the characteristics of the solar radiation that is available at the top of the earth's atmosphere. Chapter 3 is concerned with the absorption and scattering processes of solar radiation in molecular atmospheres. Photochemical p...

University of Oxford, UK, World Scientific Publ., Singapore, London, 2001, 507 pp. - ISBN 981-02-4566-1 Atmospheric science involves three main sub-disciplines: radiation, chemistry, and dynamics. Many books have been written about each of these, and non-LTE (we shall come in a moment to what it means) plays a part in most of them. However, no book exists which deals primarily with non-LTE, and this has become a serious omission. It is now realis...

Saha K. The Earth's Atmosphere. Its Physics and Dynamics

Cambridge International Science Publishing, 2008, 480 pages The authors of this book present the theoretical fundamentals of atmospheric optics as a science of the propagation, transformation and generation in the atmosphere of electromagnetic radiation from the ultraviolet to microwave range of the spectrum. The main characteristics of the planets of the solar system and atmospheres are described. Special attention is given to the equation of...

Справочник
National Oceanic And Amospheric Administration, National Aeronautics And Space Administration, United States Air Force, Washington, D.C. October 1976, NOAA-S/T 76-1562, 241 pp. The U.S. Standard Atmosphere, 1976, which is a revision of the U.S. Standard Atmosphere, 1962, was generated under the impetus of increased knowledge of the upper atmosphere obtained over the past solar cycle. Above 50 km, this Standard is based on extensive new rocket dat...

Zdunkowski W., Trautmann T., Bott A. Radiation in the atmosphere: A course in Theoretical Meteorology