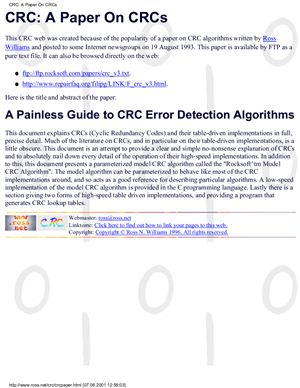 Издательство Dover Publications, 1965, -345 pp. Statistical communication theory is generally regarded as having been founded by Shannon A948) and Wiener A949), who conceived of the communication situation as one in which a signal chosen from a specified class is to be transmitted through a channel, but the output of the channel is not determined by the input. Instead, the channel is described statisti- statistically by giving a probability dist...

Pages : 115 Publication Date : Oct 1997 Document Summary: This paper deals with complexity issues in the theory of linear error-correcting codes. Algorithmic problems that this paper study are constructing good codes, encoding and decoding them. According to their complexity, problems are divided into easy, i.e., polynomial in the length n of the code, and difficult, i.e., exponential ones. The first part deals with easy problems. This paper...

Birkhauser Boston, 2011. - 260 pages. Using an original mode of presentation, and emphasizing the computational nature of the subject, this book explores a number of the unsolved problems that still exist in coding theory. A well-established and highly relevant branch of mathematics, the theory of error-correcting codes is concerned with reliably transmitting data over a ‘noisy’ channel. Despite frequent use in a range of contexts, the subject...

Издательство John Wiley, 2005, -290 pp. This book provides a systematic approach to the problems involved in the application of error-correcting codes in data networks. Over the last two decades the importance of coding theory has become apparent. Thirty years ago developers of communication systems considered error-correcting coding to be somewhat exotic. It was considered as an area of interest only for mathematical engineers or mathematicians...

Издательство Artech House, 1995, -133 pp. This book aims to be an introduction to the topic of error-correcting codes, a topic of major importance in digital communication whenever accuracy is critical. There are several excellent specialist textbooks (and one or two almost unreadable ones) on the subject, in addition to innumerable articles and papers in the journals. Despite this, the basics of digital error detection and correction are unfami...

Из серии Foundations and Trends in Signal Processing издательства NOWPress, 2010, -224 pp. Изложение современных подходов к кодированию информации. Digital media technologies have become an integral part of the way we create, communicate, and consume information. At the core of these technologies are source coding methods that are described in this monograph. Based on the fundamentals of information and rate distortion theory, the most relevant...