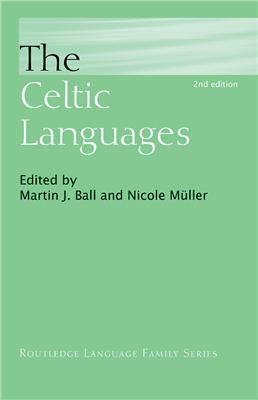 The Celtic Languages describes in depth all the Celtic languages from historical, structural and sociolinguistic perspectives with individual chapters on Irish, Scottish Gaelic, Manx, Welsh, Breton and Coish.

This second edition has been thoroughly revised to provide a comprehensive and up-to-date account of the mode Celtic languages and their current sociolinguistic status along with complete descriptions of the historical languages.

This comprehensive volume is arranged in four parts. The first part offers a description of the typological aspects of the Celtic languages followed by a scene setting historical account of the emergence of these languages. Chapters devoted to Continental Celtic, Old and Middle Irish, and Old and Middle Welsh follow. Parts two and three are devoted to linguistic descriptions of the contemporary languages. Part two has chapters on Irish, Scots Gaelic and Manx, while Part three covers Welsh, Breton and Coish. Part four is devoted to the sociolinguistic situation of the four contemporary Celtic languages and a final chapter describes the status of the two revived languages Coish and Manx.

With contributions from a variety of scholars of the highest reputation, The Celtic Languages continues to be an invaluable tool for both students and teachers of linguistics, especially those with an interest in typology, language universals and the unique sociolinguistic position which the Celtic languages occupy.

Dr Martin J. Ball is Hawthoe-BoRSF Endowed Professor, and Director of the Hawthoe Research Center, at the University of Louisiana at Lafayette. Dr Ball has over 120 academic publications. Among his books are The Use of Welsh, Mutation in Welsh, and Welsh Phonetics.

Dr Nicole M?ller is Hawthoe-BoRSF Endowed Professor at the University of Louisiana at Lafayette. Among her books are Mutation in Welsh, and Agents in Early Irish and Early Welsh.

Издательство: MPG Books Ltd Год издания: 2004 Количество страниц: Язык: English This book is based on a great deal of good will and active input from literally hundreds of individuals. I am very grateful to everyone who contributed, without any material incentive, as an interviewee or questionnaire respondent, local contact person or mediator. All translations of interview extracts and quotes from Gaelic and Sorbian publications that are not oth...

Словарь
Издатель: Hippocrene Books Год издания: 1998 Количество страниц: 277 ISBN-10: 0781806321 ISBN-13: 978-0781806329 Язык: English Although this dictionary was compiled in 1896, it served well as the research tool I hoped it would. I needed some words of ancient Celtic for an in-progress novel, but Macbain also gave others in Gaulish and Gothic that were useful. A total of 45 language derivations is given, not for the same word, of course, but where...

Словарь
Издательство: John Grant Год выпуска: 1909 Количество страниц: 1022 Формат: PDF Язык курса: Английский Гэльско-английский и английско-гэльский словарь 1909 года. THE Very Reverend DR. BAIRD, Principal of the University of Edinburgh, so distinguished for hig unwearied and patriotic exertions for the advancement of education, and the diffusion of knowledge throughout the Highlands and Isles of Scotland, having projected two periodical publication...

Издательство: Edinburgh's Telford College Год выпуска: 1995 Количество страниц: 119 ISBN: 1900674009, 9781900674003 Формат: PDF Язык курса: Английский Введение в гэльский (шотландский) язык. A great many people have felt, at one time or another, that they would like to learn to speak Scottish Gaelic. Far fewer people, however, seem to get round to doing anything about it, and that is a great pity. Often finding the time can be a problem, or perh...

Robertson B., Taylor I. Teach Yourself Gaelic Complete Course

Robertson B. , Taylor I. Teach Yourself Gaelic Complete Course. - Ldn. , Sydney, Auckland: Hodder and Stoughton Ltd, 1998. This course is designed for the absolute beginner, working alone or as part of a group, who wishes to communicate with other speakers of the language in everyday situations using functional, practical language. You will learn, among other things, how to give information about yourself and ask for similar information about ot...

Watson A. The Essential Gaelic-English Dictionary

Словарь
Watson A. The Essential Gaelic-English Dictionary. - Birlinn Publishers, 2001. - 440 p. Dictionary makers often point out that their work is a compromise -between completeness on the one hand and space and expense on the other. Even the monumental Dwelly dictionary of Gaelic is not comprehensive, and there are stories of copies of Dwelly in Highland homes, their pages speckled with words added by the family from their own Gaelic. Another common...