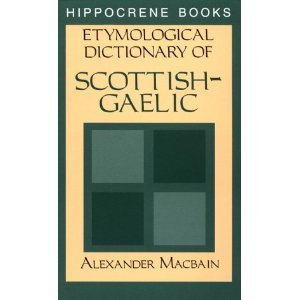 Although this dictionary was compiled in 1896, it served well as the research tool I hoped it would. I needed some words of ancient Celtic for an in-progress novel, but Macbain also gave others in Gaulish and Gothic that were useful. A total of 45 language derivations is given, not for the same word, of course, but where applicable. For example, one entry that included a well-known Gallic name, "Cingetorix," gave its derivation and literal translation, as well as Irish, Old Irish, Welsh, Coish, Breton, Indo-European, German and Sanskrit variations on the root word. Macbain starts with an outline of Gaelic etymology, discussing its Celtic roots in an overview of Aryan or Indo-European languages, and the pronunciation of Gaelic and Celtic alphabets, accents and word-building. A synopsis of Gaelic, Old Irish and Gadelic noun declensions and verb conjugations is included. Macbain quotes sources from 740 CE to his late 19th century contemporaries. A drawback is that there is no English to Scottish-Gaelic section, but that at least forces you to scan the origin of each word entry. Albert Noyer, author, The Saint's Day Deaths.
This dictionary does contain interesting words which likely have cultural links to Scotland, for example instead of having the word "cow" they might have fifteen different words of variation, with meanings like "newbo cow with spots" and other very specific forms. While these translations were interesting from a cultural perspective, this book simply did not deliver when I was looking for a word that I would use in real conversation. Unfortunately this book is simply too outdated for use as a primary leaer's dictionary.
Похожие разделы
Смотрите также

Издательство: Steve Savage Publishers Limited Год: 2006 Количество страниц: 319 Гэльские глаголы - систематизированные и упрощенные (гэльский/шотландский язык). To hold any kind of conversation in Scottish Gaelic, you need a firm grasp of the Gaelic verb. Sentences tend to start with a verb, and even to answer a simple 'yes' or 'no' in Gaelic requires the confident and correct use of verbs. Not only does this book explain the formation and func...

Словарь
Издательство: Taylor & Francis e-Library Год выпуска: 2006 Количество страниц: 785 ISBN: 0-203-22259-8 Формат: PDF Язык курса: Английский Гэльско-английский словарь. Описание: This book fulfils a keenly-felt need for a modern, comprehensive dictionary of Scottish Gaelic into English. The numerous examples of usage and idiom in this work have been modelled on examples culled from modern literature, and encompass many registers ranging from m...

Mackinnon, R. Teach Yourself Gaelic. - Hodder and Stoughton, 1975. - 324 p. (Нет страниц 102-103) This book provides a modern and lively introduction to Scottish Gaelic, a language that holds the key to a very important part of Scotland's cultural heritage. The lessons are carefully graded, and each step is accompanied by exercises and a comprehensive scheme of pronunciation. The course is suitable for use not only by the private student but a...

Словарь
Издательство: Acair and Mercat Press Год выпуска: 1992 Количество страниц: 315 ISBN: 0-08-027513-5 Формат: PDF Язык курса: Английский Гэльско-английский и английско-гэльский словарь. This Dictionary is based on A Pronouncing Gaelic Dictionary by Neil MacAlpine which made its first appearance about 1831. In 1903 it reached its twelfth edition, which indicates the useful position it occupied in the study of Gaelic. The work of revision and enlarg...

Watson A. The Essential English-Gaelic Dictionary

Словарь
Watson A. The Essential English-Gaelic Dictionary. - Birlinn, 2005. - 422 p. This new dictionary is intended for learners of Gaelic — from beginners to university and college students. It gives generous coverage of the core of the language, but the inclusion of vocabulary from fields such as business and IT means that it will also be a valuable tool for all who require an up-to-date reference work. It contains a large amount of explanatory mate...