Barrow J.D. The Book of Nothing: Vacuums, Voids, and the Latest Ideas about the Origins of the Universe 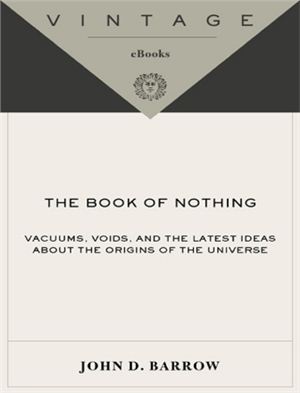 What conceptual blind spot kept the ancient Greeks (unlike the Indians and Maya) from developing a concept of zero? Why did St. Augustine equate nothingness with the Devil? What tortuous means did 17th-century scientists employ in their attempts to create a vacuum? And why do contemporary quantum physicists believe that the void is actually seething with subatomic activity? You'll find the answers in this dizzyingly erudite and elegantly explained book by the English cosmologist John D. Barrow.

Ranging through mathematics, theology, philosophy, literature, particle physics, and cosmology, The Book of Nothing explores the enduring hold that vacuity has exercised on the human imagination. Combining high-wire speculation with a wealth of reference that takes in Freddy Mercury and Shakespeare alongside Isaac Newton, Albert Einstein, and Stephen Hawking, the result is a fascinating excursion to the vanishing point of our knowledge.
Похожие разделы
Смотрите также

Asimov I. Atom: Journey Across the Subatomic Cosmos

Dutton Adult, 1991, 319 Pages, ISBN: 0525249907 The legendary Isaac Asimov starts what is perhaps the finest of all his books with a simple query: How finely can a piece of matter be divided? But like many simple questions, this one leads readers on a far-flung quest for a final answer, a search that encompasses such fascinating phenomena as light and electricity and their components-strange but real bits of matter that challenge our assumption...

Кальдер Нигель. "Волшебная вселенная: большое путешествие в современную физику. " 2003 г. , 756 стр. На английском языке. Качество высокое (PDF-оригинал). As a prolific author, BBC commentator, and magazine editor, Nigel Calder has spent a lifetime spotting and explaining the big discoveries in all branches of science. In Magic Universe, he draws on his vast experience to offer readers a lively, far-reaching look at modern science in all its glor...

Everett A., Roman Th. Time Travel and Warp Drives: A Scientific Guide to Shortcuts through Time and Space

The University of Chicago Press, 2011, 268 pages Sci-fi makes it look so easy. Receive a distress call from Alpha Centauri? No problem: punch the warp drive and you're there in minutes. Facing a catastrophe that can't be averted? Just pop back in the timestream and stop it before it starts. But for those of us not lucky enough to live in a science-fictional universe, are these ideas merely flights of fancy—or could it really be possible to trav...

Bantam, 1988, 212 pages A landmark volume in science writing by one of the great minds of our time, Stephen Hawking’s book explores such profound questions as: How did the universe begin—and what made its start possible? Does time always flow forward? Is the universe unending—or are there boundaries? Are there other dimensions in space? What will happen when it all ends? Told in language we all can understand, A Brief History of Time plunges...

Prometheus Books, 2004, 363 pages When scientists peer through a telescope at the distant stars in outer space or use a particle-accelerator to analyse the smallest components of matter, they discover that the same laws of physics govern the whole universe at all times and all places.Physicists call the eternal, ubiquitous constancy of the laws of physics symmetry. Symmetry is the basic underlying principle that defines the laws of nature and h...

World Scientific Publishing Company, 2010, 332 pages This is a textbook for a survey course in physics taught without mathematics, that also takes into account the social impact and influences from the arts and society. It combines physics, literature, history and philosophy from the dawn of human life to the 21st century. It will also be of interest to the general reader. This book attempts to remedy this classical situation by communicating...

6 edition, Wiley, 2010, 637 pages Over 100,000 readers have relied on Trefil to gain a better understanding of physics, chemistry, astronomy, earth sciences, and biology. The book focuses on the great ideas in each field while showing readers how core scientific principles connect to their daily lives. The sixth edition emphasizes important themes and relationships, along with new real world connections. Scientific American has been added to th...