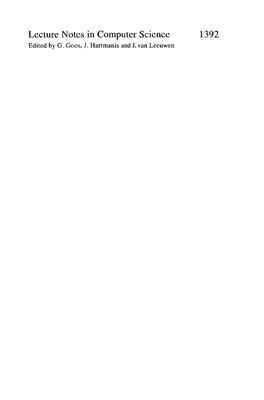 Electronic publishing and digital libraries have recently become a major new area of development and research in computer science. The interest is caused on one side by the tremendous growth of all types of publications and the need to provide immediate and selective access, on the other side by advances in computer technology that have brought unprecedented digital storage capacity and network transmisson power to the desktop of every scientist.
Electronic fulltext and multimedia libraries have the potential of changing the entire publication process, particulary in science and related fields. This will affect many scientists in their roles of authors, reviewers, and readers of scientific literature. It will also allow for new types of information to be disseminated at low cost and high speed that cannot be represented on paper. We refer to visualizations, animations, and simulations that in many fields are crucial for explaining and understanding scientific phenomena. The roles of publishers, distributors, and librarians will also undergo changes because different ways will be found to bring information from the producer to the consumer.
Any project addressing this area will be confronted with technical and nontechnical problems at the same time. Authors expect advice on how to prepare information that is to be consumed in an electronic environment. Publishers are conceed about user acceptance, asset protection, and accounting. An academic librarian wants to lea how to administer users and the users want to know where to look for relevant information and how to get at it swiftly and quickly. These are just examples of the questions that come to mind.
For computer scientists, the topic of digital libraries has twofold implications. As in all other fields there will be new ways and means for publication and communication. In addition, many questions raised are genuine research topics in computer science. Examples of the latter are the storage and structuring of information, the search and query operations to be applied, and the intelligence behind user interfaces; but also security aspects, accounting methods, and transaction models have to satisfy new requirements.
This volume documents results of a major digital library pilot project, initiated by the German Informatics Society (GI), and involving authors, publishers, librarians, and computer science institutes in Germany. The project MeDoc (abbreviation for Multimedia Electronic Documents) brought together some 30 academic institutions and several industrial partners in Germany and Switzerland in a two-year effort. These institutions participated in the project either as developers or as pilot users. In the first case, the researchers involved generated novel ideas and concepts, then designed and developed prototype software functions to be used and evaluated by themselves and the pilot users. The representatives of the pilot users defined requirements, evaluated existing tools, converted source texts of books to displayable format, and assessed the use of electronic contents at their sites.
The library contents used in the project came from very different sources. Of highest importance were the books and jouals provided by some 15 scientific publishers. Other material came from ACM, the IEEE Computer Society, IBM Germany, and several academic institutions contributing hundreds of research reports and other online material. Access was also provided to several existing or newly created reference databases.
The papers m this volume present the technical and non-technical answers arrived at during the MeDoc project. After an overview of the entire project, a detailed discussion follows of the design considerations that went into the MeDoc system. This is a prototype of a distributed digital library facility. Several complementary activities provided Important results which are not part of the MeDoc system proper. Valuable experiences where obtained during the conversion of books and jouals for the electromc library, experiences that authors and publishers will benefit from. Since the MeDoc digital library is operated in a countrywide trial for several months, first feedback on user behavior was obtained.
At several points In the project, close contacts were made to related efforts in Germany, other European countries and the USA. Two of these projects have submitted material for thin volume, outlining the state of the art by showing work being done elsewhere. In a final workshop at Schlo? Dagstuhl, the contents of the selected papers for this volume were presented and the writeups subsequently critically reviewed by inteational experts.

Part I: Project Overview
The MeDoc Digital Library Project - Its Goals and Major Achievements
Part II: Design Consideratios of the MeDoc System
The MeDoc System - A Digital Publication and Reference Service for Computer Science
Design and Implementation of the MeDoc Fulltext System
Conception of the User Agent - The User Interface of the MeDoc System
Access to Bibliographic Databases - The Provider Agents in MeDoc
Provider Selection - Design and Implementation of the MeDoc Broker
Query Transformation for Heterogeneous Provider Systems in MeDoc
The MeDoc Communication Protocol
The MeDoc Library: Security Aspects
Cost Models and Accounting in MeDoc .
Part III: Complimentary Activities to the MeDoc System
Ariadne, an Interactive Navigation and Search System for Computer - Science Information on the World-Wide Web
Grey Literature and Multiple Collections in NCSTRL
Digital Publishing for Conference Proceedings on CD-ROM
Part IV: Application of MeDoc Results and User Experiences
Books and Jouals in MeDoc - Experiences on Bringing Publications Online
Experiences in Document Conversions During the MeDoc Project
Digital Books in MeDoc - A First Analysis of Usage Pattes
Use of MeDoc Offerings in Technical Education
Part V: Reports from Related Projects
The Stanford InfoBus and Its Service Layers: Augmenting the Inteet with Higher-Level Information Management Protocols
Objectives, Results and Conclusions of the European DECOMATE Project: Delivery of Copyright Material to End Users
Похожие разделы
Смотрите также