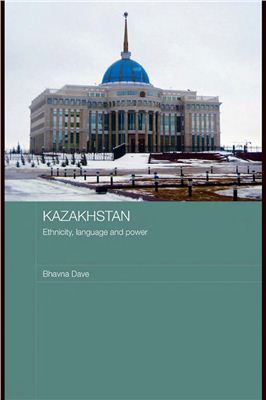 Kazakhstan is emerging as the most dynamic economic and political actor in Central Asia. It is the second largest country of the former Soviet Union, after the Russian Federation, and has rich natural resources, particularly oil, which is being exploited through massive US investment. Kazakhstan has an impressive record of economic growth under the leadership of President Nursultan Nazarbaev, and has ambitions to project itself as a mode, wealthy civic state, with a developed market economy. At the same time, Kazakhstan is one of the most ethnically diverse countries in the region, with very substantial non-Kazakh and non-Muslim minorities. Its political regime has used elements of political clientelism and neo-traditional practices to bolster its rule. Drawing from extensive ethnographic research, interviews, and archival materials this book traces the development of national identity and statehood in Kazakhstan, focusing in particular on the attempts to build a national state. It argues that Russification and Sovietization were not simply 'top-down' processes, that they provide considerable scope for local initiatives, and that Soviet ethnically-based affirmative action policies have had a lasting impact on ethnic elite formation and the rise of a distinct brand of national consciousness.
Похожие разделы
Смотрите также

Nations in Transition Facts On File, Inc. 132 West 31st Street New York NY 10001 Library of Congress Cataloging-in-Publication Data This new volume in the Nations in Transition series examines the problems confronting the five Central Asian Republics—Uzbekistan, Turkmenistan, Tajikistan, Kazakhstan, and Kyrgyzstan—as they adjust to their relatively new status as independent countries. With varying degrees of success and stability, the countries...

Monograph– Almaty: The Kazakhstan Institute for Strategic Studies under the President of the Republic of Kazakhstan, 2010. – 356 p. This joint monograph aims to present a generalised image of modern Kazakhstan. The book focuses on Kazakhstan’s role in the international community and discusses issues of the political, economic and social life of modern Kazakh society. It contains the history of the country and information on its present administra...