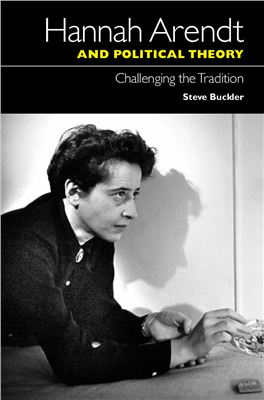 In an interview broadcast on West German television in 1964, Hannah Arendt, by then a famous political thinker, insisted that she did not regard herself as a ‘philosopher’ and had no desire to be seen as such: her conce was with politics. She was not even happy with the suggestion that what she did was ‘political philosophy’, regarding this as a term overloaded with tradition. She preferred what she took to be the less freighted epithet of ‘political theorist’. There is, Arendt argued, a fundamental tension between the philosophical and the political; and the historical tendency to think about the contingent and circumstantial business of politics from a philosophical point of view, seeking to speak about it in terms of the universal and the eteal, has had unfortunate consequences. In the light of this conviction, Arendt said she wished to look at politics ‘with eyes unclouded by philosophy’ (Arendt 1994: 2). The aim of this book is to
explore the implications of this statement as they make themselves felt in Arendt’s work and to suggest that they underwrite a distinctive, potent and consistently challenging way of theorising politics.
Arendt was an unorthodox political theorist. She wrote in an eclectic style, involving a mixture of idioms and she did not shy away from investing her work with elements of paradox and perplexity.
Похожие разделы
Смотрите также

The history of British political thought has been one of the most fertile fields of Anglo-American historical writing in the last half-century. David Armitage brings together an interdisciplinary and international team of authors to consider the impact of this scholarship on the study of early modern British history, English literature, and political theory. Leading historians survey the impact of the history of political thought on the 'new' his...

Pareto and Political Theory offers a much-needed reappraisal of Vilfredo Pareto's often ignored or misunderstood contribution to the theory and philosophy of politics. Joseph V. Femia disputes the depiction of Pareto as a proto-fascist and locates him in a clear tradition of 'sceptical liberalism', which eschews metaphysical abstractions and adopts a 'realist' approach to practical politics

Rawls J. Lectures on the History of Political Philosophy

This last book by the late John Rawls, derived from written lectures and notes for his long-running course on modern political philosophy, offers readers an account of the liberal political tradition from a scholar viewed by many as the greatest contemporary exponent of the philosophy behind that tradition. Rawls's goal in the lectures was, he wrote, "to identify the more central features of liberalism as expressing a political conception of jus...

This is a significantly expanded edition of one of the greatest works of modern political theory. Sheldon Wolin's Politics and Vision inspired and instructed two generations of political theorists after its appearance in 1960. This new edition retains intact the original ten chapters about political thinkers from Plato to Mill, and adds seven chapters about theorists from Marx and Nietzsche to Rawls and the postmodernists. The new chapters, which...