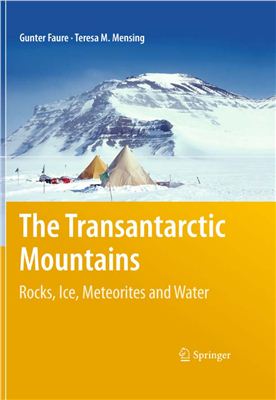 Изд-во Springer, 2010. 832p.
This book presents a summary of the geology of the Transantarctic Mountains for Earth scientists who may want to work there or who need an overview of the geologic history of this region. In addition, the properties of the East Antarctic ice sheet and of the meteorites that accumulate on its surface are treated in separate chapters. The presentation ends with the Cenozoic glaciation of the Transantarctic Mountains including the limnology and geochemical evolution of the saline lakes in the ice-free valleys. The subject matter in this book is presented in chronological order starting about 750 million years ago and continuing to the present time. The chapters can be read selectively because the introduction to each chapter identifies the context that gives relevance to the subject matter to be discussed. The text is richly illustrated with 330 original line drawings as well as with 182 color maps and photographs. The book contains indexes of both subject matter and of authors’ names that allow it to be used as an encyclopedia of the Transantarctic Mountains and of the East Antarctic ice sheet. Most of the chapters are supplemented by Appendices containing data tables, additional explanations of certain phenomena (e.g., the formation and seasonal destruction of stratospheric ozone), and illustrative calculations (e.g., 38Cl dates of meteorites). The authors have spent a combined total of fourteen field seasons between 1964 and 1995 doing geological research in the Transantarctic Mountains with logistical support by the US Antarctic Program. Although Antarctica is remote and inaccessible, tens of thousands of scientists of many nationalities and their assistants have worked there and even larger numbers of investigators will work there in the future.
Похожие разделы
Смотрите также

This textbook details basic principles of planetary science that help to unify the study of the solar system. It is organized in a hierarchical manner so that every chapter builds upon preceding ones. Starting with historical perspectives on space exploration and the development of the scientific method, the book leads the reader through the solar system. Coverage explains that the origin and subsequent evolution of planets and their satellites c...

Karato S-I. Deformation of Earth materials. An introduction to the rheology of solid Earth