Fehrenbach T.R. The Battle of Anzio 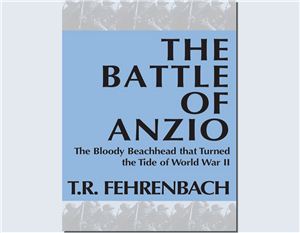 The Battle of Anzio was among of the most bloody of the World War II conflicts. T.R. Fehrenbach's accurate account stunningly depicts the reality of the Allied forces' fight for survival on an Italian beach as they stormed what Winston Churchill called the soft underbelly of the Axispowers. In one of the tuing points of the war, the allies clung to a narrow strip of sand while German planes swooped in from above and artillery shells and mortar fire pounded them on the ground. This is a true and dramatic account of the battle from the perspective of a soldier and military historian, told with pride, compassion and spirit. T.R. Fehrenbach's account of war needs no embellishing and brings you into the thick of the action.
Похожие разделы
Смотрите также

Oxford: Osprey Publishing Ltd, 2002. - 96 pp. ISBN: 9781841764221 The Argentine invasion of the Falklands in 1982 sparked national outrage and Britain felt she had to avenge the humiliation and protect her own. This volume explores both the military and political dimensions of this important conflict, including detailed accounts of the air / sea battle, the Battle for San Carlos Water, Goose Green, Mt Harriet, Tumbledown and many others. It expl...

Haskew M. The Sniper at War

London: Amber Books LTD, 2004. - 192 p. Printed in Italy Nothing chills the blood of a soldier on the battle field more than the crack of a rifle shot and the cry of Sniper! A skilled sniper can stop even large units in their tracks and damage the enemys morale. The Sniper at War looks at the impact and role of the sniper from the American Revolution to the present day. From the very beginning, snipers risked their lives for the chance of a cle...