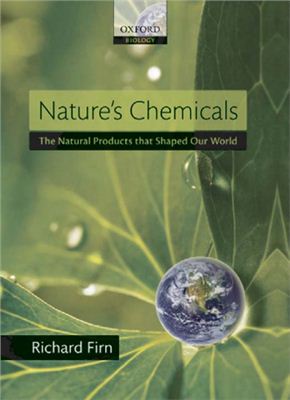 Oxford University Press, 2010. – 250 p
Natural Products (NPs) is the term used to describe the hundreds of thousands of chemical compounds or substances that are continually produced by living organisms (plants and microbes). Hundreds of millions of tons of these chemicals are generated annually, and the trade in just a few of these has dominated human economic activity for thousands of years. Indeed the current world geopolitical map has been shaped by attempts to control the supply of a few of these compounds. Every day of our lives each human spends time and money trying to procure the NPs of their choice. However, despite their overwhelming influence on human culture, they remain poorly understood. Yet a knowledge of NPs can help in our search for new drugs, further the debate about GM manipulation, help us address environmental pollution, and enable a better understanding of drug trafficking

Nature's Chemicals is the first book to describe Natural Products (NPs) in an evolutionary context, distilling the few simple principles that gove the way in which organisms (including humans) have evolved to produce, cope with, or respond to NPs. It neatly synthesizes a widely dispersed literature and provides a general picture of NPs, encompassing evolution, history, ecology, and environmental issues (along with some deeper theory relevant to biochemistry), with the goal of enabling a wider section of the scientific community to fully appreciate the crucial importance of Natural Products to human culture and future survival.

What Are Natural Products?
The Importance of NPs in Human Affairs
The Main Classes of NPs—Only a Few Pathways Lead to the Majority of NPs
Are NPs Different from Synthetic Chemicals?
Why Do Organisms Make NPs?
NPs, Chemicals and the Environment
Natural Products and the Pharmaceutical Industry
The Chemical Interactions between Organisms
The Evolution of Metabolism
The Genetic Modifi cation of NP Pathways—Possible Opportunities and Possible Pitfalls
Похожие разделы
Смотрите также

Elsevier. 2000. 793 p. The Metabolism and Biochemical Actions of Alkaloids in Animals Using Chemical Ecology to Locate New Antifungal Natural Products Natural Triterpenoids as Anti-Inflammatory Agents Current Status of the Chemistry and Synthesis of Natural Antimalarial Compounds and natural Substance used to Alleviate Symptoms of Diabetes (Aldose Reductase and A-Glucosidase Inhibitors) A Diradical Route to Bioactive Natural Products and their A...