Garfinkle D., Garfinkle R. Three Steps to the Universe: From the Sun to Black Holes to the Mystery of Dark Matter 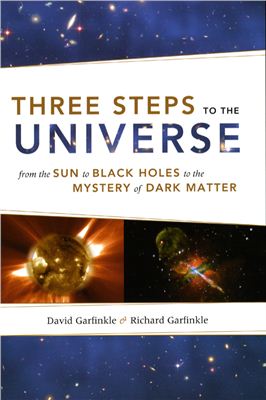 If scientists can’t touch the Sun, how do they know what it’s made of? And if we can’t see black holes, how can we be confident they exist? Gravitational physicist David Garfinkle and his brother, science fiction writer Richard Garfinkle, tackle these questions and more in Three Steps to the Universe, a tour through some of the most complex phenomena in the cosmos and an accessible exploration of how scientists acquire knowledge about the universe through observation, indirect detection, and theory.

The authors begin by inviting readers to step away from the Earth and reconsider our Sun. What we can directly observe of this star is limited to its surface, but with the advent of telescopes and spectroscopy, scientists know more than ever about its physical characteristics, origins, and projected lifetime. From the Sun, the authors jouey further out into space to explore black holes. The Garfinkle brothers explain that our understanding of these astronomical oddities began in theory, and growing mathematical and physical evidence has unexpectedly supported it. From black holes, the authors lead us further into the unknown, to the dark matter and energy that pervade our universe, where science teeters on the edge of theory and discovery. Retuing from the depths of space, the final section of the book brings the reader back down to Earth for a final look at the practice of science, ending with a practical guide to disceing real science from pseudoscience among the cacophony of print and online scientific sources.

Three Steps to the Universe will reward anyone interested in leaing more about the universe around us and shows how scientists uncover its mysteries.
Похожие разделы
Смотрите также

InTech. 2011. - 396 p. Первоисточник: This book presents some aspects of the cosmological scientific odyssey that started last century. The chapters vary with different particular works, giving a versatile picture. It is the result of the work of many scientists in the field of cosmology, in accordance with their expertise and particular interests. Is a collection of different research papers produced by important scientists in the field of co...

8th Edition, W. H. Freeman and Company, 2008, 851 pages Known edition after edition for its state-of-the-science coverage, Universe breaks new ground in its Eighth Edition with added pedagogical support and pioneering media and supplements. It places the basics of astronomy and the process of science within the grasp of introductory students. Introducing Astronomy Knowing the Heavens Eclipses and the Motion of the Moon Gravitation and the Walt...

Cambridge University Press, 1998, 297 Pages What is the Universe made of? How old is it? How does a supernova explode? Can we detect black holes? And where do cosmic rays originate? This volume provides a comprehensive and pedagogical introduction to modern ideas and challenging problems in nuclear and particle astrophysics. Articles written by eight leading experts cover a wealth of exciting topics. Together, they present the Universe as a labo...

Mazure A., Le Brun V. Matter, Dark Matter, and Anti-Matter: In Search of the Hidden Universe

Springer Science and Business Media, 2012, 172 pages, ISBN: 1441988211 For over ten years, the dark side of the universe has been headline news. Detailed studies of the rotation of spiral galaxies, and 'mirages' created by clusters of galaxies bending the light from very remote objects, have convinced astronomers of the presence of large quantities of dark (unseen) matter in the cosmos. The most striking fact is that they seem to compromise ab...

Нардо Д. «Чёрные дыры» 2004 г. , 96 стр., на английском языке. The remains of collapsed stars, black holes possess enormous gravities that pull in and annihilate any matter that strays too close. The latest evidence and theories for these bizarre objects are presented in this intriguing book, including how black holes were first predicted, how they form, their physical properties, and how scientists detect them. Also covered are the giant black h...

Cambridge University Press, 2006, 255 pages Spectacular observational breakthroughs by recent experiments, and particularly the WMAP satellite, have heralded a new epoch of CMB science forty years after its original discovery. Taking a physical approach, the authors probe the problem of the 'darkness' of the Universe: the origin and evolution of dark energy and matter in the cosmos. Starting with the observational background of modern cosmology,...

Cambridge University Press, 2010. - 205 pp. Most astronomers and physicists now believe that the matter content of the Universe is dominated by dark matter: hypothetical particles which interact with normal matter primarily through the force of gravity. Though invisible to current direct detection methods, dark matter can explain a variety of astronomical observations. This book describes how this theory has developed over the past 75 years, and...

Weinheim: WILEY-VCH Verlag GmbH & Co. KGaA, 2004. – 661 pages. This textbook is the outgrowth of a course on the physics of compact objects, which we have taught at Cornell University since 1975. As a class, compact stars consist of white dwarfs, neutron stars, and black holes. As the endpoint states of normal stellar evolution, they represent fundamental constituents of the physical Universe. This book, like the course itself, is a product...