Mazure A., Le Brun V. Matter, Dark Matter, and Anti-Matter: In Search of the Hidden Universe 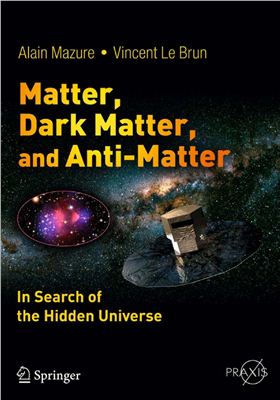 For over ten years, the dark side of the universe has been headline news. Detailed studies of the rotation of spiral galaxies, and 'mirages' created by clusters of galaxies bending the light from very remote objects, have convinced astronomers of the presence of large quantities of dark (unseen) matter in the cosmos. The most striking fact is that they seem to compromise about 95% of the matter/energy content of the universe. As for ordinary matter, although we are immersed in a sea of dark particles, including primordial neutrinos and photons from fossil cosmological radiation, both we and our environment are made of ordinary, 'baryonic' matter. Authors Mazure and Le Brun present the inventory of matter, baryonic and exotic, and investigating the nature and fate of matter's twin, anti-matter. They show how technological progress has been a result of basic research, in tandem with the evolution of new ideas, and how the combined effect of these advances might help lift the cosmic veil.

Matter concentrated
The realm of the nebulae
Getting warmer
Cosmic Cluedo: where, when and how?
300,000 years on: all present and correct
Cosmic canvas
Lifting the veil: simulations
A constant search
From telescopes to accelerators
Похожие разделы
Смотрите также

InTech. 2011. - 396 p. Первоисточник: This book presents some aspects of the cosmological scientific odyssey that started last century. The chapters vary with different particular works, giving a versatile picture. It is the result of the work of many scientists in the field of cosmology, in accordance with their expertise and particular interests. Is a collection of different research papers produced by important scientists in the field of co...

Garfinkle D., Garfinkle R. Three Steps to the Universe: From the Sun to Black Holes to the Mystery of Dark Matter

The University of Chicago Press, 2008, 265 Pages, ISBN: 0226283461 If scientists can’t touch the Sun, how do they know what it’s made of? And if we can’t see black holes, how can we be confident they exist? Gravitational physicist David Garfinkle and his brother, science fiction writer Richard Garfinkle, tackle these questions and more in Three Steps to the Universe, a tour through some of the most complex phenomena in the cosmos and an accessi...

Britannica Educational Publishing + Rosen Educational Services, 2011, 96 pages Fathoming the boundlessness of space and the universe, we are immediately filled with curiosity about our own origins and wonder about the objects, life forms, and matter that populate the cosmos. Through the observations and work of astronomers over time, we have slowly been able to reduce the number of unknowns and develop explanations or theories for some of the c...

Нардо Д. «Чёрные дыры» 2004 г. , 96 стр., на английском языке. The remains of collapsed stars, black holes possess enormous gravities that pull in and annihilate any matter that strays too close. The latest evidence and theories for these bizarre objects are presented in this intriguing book, including how black holes were first predicted, how they form, their physical properties, and how scientists detect them. Also covered are the giant black h...

Cambridge University Press, 2006, 255 pages Spectacular observational breakthroughs by recent experiments, and particularly the WMAP satellite, have heralded a new epoch of CMB science forty years after its original discovery. Taking a physical approach, the authors probe the problem of the 'darkness' of the Universe: the origin and evolution of dark energy and matter in the cosmos. Starting with the observational background of modern cosmology,...

Cаmbridge Univеrsity Prеss, 1991, 423 pages Most of the solar system exists in the plasma state (the fourth state of matter). Its subtle nonlinear interaction with the magnetic field can be described by the equations of magnetohydrodynamics (MHD). Over the past few years this important and complex field of research has been actively pursued and increasingly diversely applied to the fields of geophysics, space physics, and astrophysics. It is, f...

Cambridge University Press, 2010. - 205 pp. Most astronomers and physicists now believe that the matter content of the Universe is dominated by dark matter: hypothetical particles which interact with normal matter primarily through the force of gravity. Though invisible to current direct detection methods, dark matter can explain a variety of astronomical observations. This book describes how this theory has developed over the past 75 years, and...