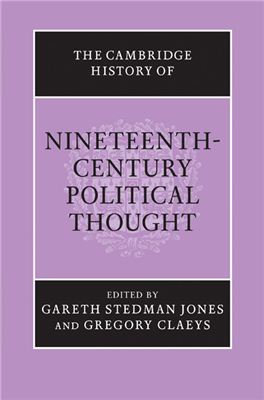 This major work of academic reference provides the first comprehensive survey of political thought in Europe, North America and Asia in the century following the French Revolution. Written by a distinguished team of inteational scholars, this Cambridge History is the latest in a sequence of volumes firmly established as the principal reference source for the history of political thought. In a series of scholarly but accessible essays, every major theme in nineteenth-century political thought is covered, including political economy, religion, democratic radicalism, nationalism, socialism and feminism. The volume also includes studies of major figures, including Hegel, Mill, Bentham and Marx, and biographical notes on every significant thinker in the period. Of interest to students and scholars of politics and history at all levels, this volume explores seismic changes in the languages and expectations of politics accompanying political revolution, industrialisation and imperial expansion and less-noted continuities in political and social thinking.
Похожие разделы
Смотрите также

Cambridge Univercity press, 1991. - 714 p. The companion volume to the highly successful Cambridge History of Medieval Political Thought, this book presents a comprehensive account of the development of European political thinking through the Renaissance and the Reformation to the "scientific revolution" and political upheavals of the seventeenth century. Recent decades have seen intensive historical investigation and reappraisal in this field....

Garnsey Peter. Thinking about Property: From Antiquity to the Age of Revolution (Ideas in Context)

Cambridge: Cambridge University Press, 2008. - 286 Pages ISBN: 052187677X Explores ancient 'foundational' texts relating to property and their reception by later thinkers in their various contexts up to the early nineteenth century. The texts include Plato's vision of an ideal polity in the Republic, Jesus' teachings on renunciation and poverty, and Golden Age narratives and other evolutionary accounts of the transition of mankind from primeval...

Publisher: Cambridge University Press, 2003. 406 pages. Language: English. This collection of essays by leading international experts offers an up-to-date, comprehensive history and analysis of multiple cases of genocide and genocidal acts, with a focus on the twentieth century. The book contains studies of the Armenian genocide, the victims of Stalinist terror, the Holocaust, and imperial Japan. Several authors explore colonialism and address t...

Hodge Carl Cavanagh. Encyclopedia of the Age of Imperialism: 1800-1914

Энциклопедия
Greenwood Press, 2007. - 1016 p. In 1800, Europeans governed about one-third of the world's land surface; by the start of World War I in 1914, Europeans had imposed some form of political or economic ascendancy on over 80 percent of the globe. The basic structure of global and European politics in the twentieth century was fashioned in the previous century out of the clash of competing imperial interests and the effects, both beneficial and harm...