Kaku M. Physics of the Impossible: A Scientific Exploration into the World of Phasers, Force Fields, Teleportation, and Time Travel 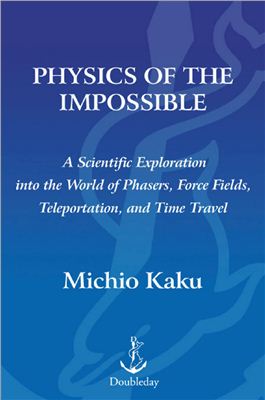 Everett A., Roman Th. Time Travel and Warp Drives: A Scientific Guide to Shortcuts through Time and Space

The University of Chicago Press, 2011, 268 pages Sci-fi makes it look so easy. Receive a distress call from Alpha Centauri? No problem: punch the warp drive and you're there in minutes. Facing a catastrophe that can't be averted? Just pop back in the timestream and stop it before it starts. But for those of us not lucky enough to live in a science-fictional universe, are these ideas merely flights of fancy—or could it really be possible to trav...

Bantam, 1988, 212 pages A landmark volume in science writing by one of the great minds of our time, Stephen Hawking’s book explores such profound questions as: How did the universe begin—and what made its start possible? Does time always flow forward? Is the universe unending—or are there boundaries? Are there other dimensions in space? What will happen when it all ends? Told in language we all can understand, A Brief History of Time plunges...

Wiley Publishing, Inc., 2004, 384 pages Does just thinking about the laws of motion make your head spin? Does studying electricity short your circuits? Do the complexities of thermodynamics cool your enthusiasm? Thanks to this book, you don’t have to be Einstein to understand physics. As you read about Newton’s Laws, Kepler’s Laws, Hooke’s Law, Ohm’s Law, and others, you’ll appreciate the For Dummies law: The easier we make it, the faster peopl...

Kaku Michio, Thompson Jennifer. Beyond Einstein: Superstrings and the Quest for the Final Theory

1997, Oxford University Press , 260 р. What is superstring theory and why is it important? Can superstrings offer the fulfilment of Einstein's lifelong dream of a Theory of Everything? Co-authored by Michio Kaku, one of the leading pioneers of superstrings, this is a thrilling account of the discoveries that have led scientists to the brightest new prospect in theoretical physics today. With all the excitement of a detective story, this book con...

World Scientific Publishing Company, 2010, 332 pages This is a textbook for a survey course in physics taught without mathematics, that also takes into account the social impact and influences from the arts and society. It combines physics, literature, history and philosophy from the dawn of human life to the 21st century. It will also be of interest to the general reader. This book attempts to remedy this classical situation by communicating...

Rogers E.M. Physics for the Inquiring Mind: The Methods, Nature, and Philosophy of Physical Science

Princeton University Press, 1960, 778 pages In our scientific age an understanding of physics is part of a liberal education. Lawyers, bankers, governors, business heads, administrators, all wise educated people need a lasting understanding of physics so that they can enjoy those contacts with science and scientists that are part of our civilization both materially and intellectually. They need knowledge and understanding instead of the feelin...

Serres M. The Birth of Physics

Clinamen Press Ltd., Manchester, 2000, Pages: 197 The Birth of Physics focuses on the largest text still intact to reach us from the Ancient Greek Atomists - Lucretius' De Rerum Natura - but mobilises everything we know about the related scientific work of the time (Archemides, Epicurus et al) in order to demand a complete reappraisal of the legacy. Serres argues that the Greeks had all the mathematical resources to formulate an adequate picture...

6 edition, Wiley, 2010, 637 pages Over 100,000 readers have relied on Trefil to gain a better understanding of physics, chemistry, astronomy, earth sciences, and biology. The book focuses on the great ideas in each field while showing readers how core scientific principles connect to their daily lives. The sixth edition emphasizes important themes and relationships, along with new real world connections. Scientific American has been added to th...