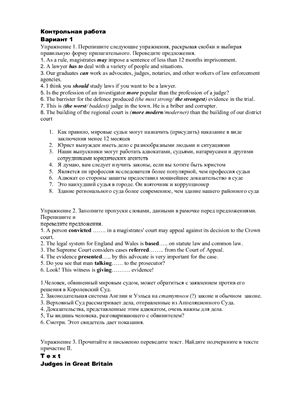 1 вариант УрГЮА
Упражнение
Перепишите следующие упражнения, раскры-
вая скобки и выбирая правильную форму прилагательного.
Переведите предложения.
As a rule, magistrates (may / might) impose a sentence of less
than 12 months imprisonment.
A lawyer (should / has to) deal with a variety of people and
situations.
Our graduates (could / can) work as advocates, judges, notaries,
and other workers of law enforcement agencies.
think you (must / should) study laws if you want to be a lawyer.
s the profession of an investigator (more / most) popular than
the profession of a judge?
The barrister for the defence produced (the most strong /
strongest) evidence in the trial.
This is (the worst / baddest) judge in the town. He is a briber and
corrupter.
The building of the regional court is (more mode / modeer)
than the building of our district court.
Упражнение
Заполните пропуски словами, данными в ра-
мочке перед предложениями. Перепишите и переведите
предложения.
referred convicted based talking giving presented
A person … in a magistrates’ court may appeal against its
decision to the Crown court.
The legal system for England and Wales is … on statute law and
common law.
The Supreme Court considers cases … from the Court of Appeal.
The evidence … by this advocate is very important for the case.
Do you see that man … to the prosecutor?
Look! This witness is … evidence!
Упражнение
Прочитайте и письменно переведите текст.
Найдите и подчеркните в тексте причастие II.
Judges in Great Britain
A judge is a public ofﬁ cial authorized to decide questions brought
before a court. The powers, functions, method of appointment, and
training of judges vary widely across different jurisdictions.
Judges are chosen from lawyers who gained considerable
experience as legal practitioners. In continental systems a law
graduate can choose to be a judge at the beginning of his / her career.
n Great Britain they cannot. A distinctive feature of the British system
s that it does not have law schools training judges.
The vast majority of British judges are magistrates. A small
proportion of judges are not magistrates. They are called ‘High Court
Judges’ and they deal with the most serious crimes. These are crimes
for which the criminal must be sent to prison for more than a year. High
Court Judges are paid salaries by the state and have considerable
legal training.
The work of judges is not easy. The judge’s decision may
frequently affect the interests of individuals and groups of people
who are not present in court. That’s why it’s true to say that the judge
has burdensome responsibilities to make decisions. But sometimes
they can make mistakes. These mistakes can be overruled by appeal
courts.
Похожие разделы