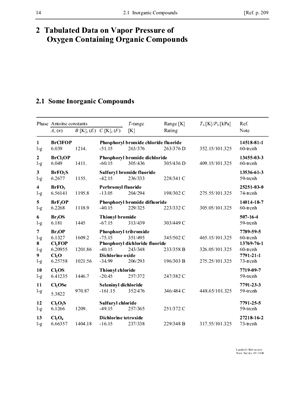 Book Series Landolt-Bostein - New Series / Editor in Chief: W. Martienssen.
J. Dykyj, J. Svoboda, R.C. Wilhoit, M. Frenkel, K.R. Hall. - Berlin-Heidelberg: Publisher Springer, 2000. – 222 p.
The present subvolume IV/20B covers oxygen containing organic chemicals, total of 3174 compounds including so vitally important classes of organic compounds as alcohols, Ketones, aldehydes, acids, ethers and esters. While the parameters presented in this series only describe pure compounds, the vapor pressures of pure compounds are essential for describing the phase behavior of mixtures accurately. The simplest equation for describing the phase behavior of mixtures is Raoult’s Law which states that the mole fraction of a component in an equilibrium vapor mixture multiplied by the total pressure equals the mole fraction of that component in the equilibrium liquid mixture multiplied by the vapor pressure. More accurate equations append correction terms to each side of this equation.
Because these volumes present vapor pressures for such a wide variety of organic compounds, they should be of value to professionals in a wide variety of commercial and academic activities. Because they have been evaluated, those who would use these values are freed from the necessity of selecting from among various sets of data.
Похожие разделы
Смотрите также