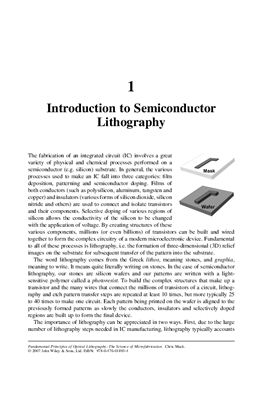 Wiley, 2008.- 534 pages.
Microlithography is the main technical driving force behind one of the most important phenomenon in the history of technology - microelectronics and the incredible shrinking transistor. These dramatic increases in electronic functionality per unit cost each year for early five decades, have transformed society. The gating piece of technology in this marvel of manufacturing progress has always been the process of lithography - the photochemical printing of circuit pattes onto semiconductor wafers.
This text attempts a difficult task - to capture the fundamental principles of the incredibly fast-changing field of semiconductor microlithography in such a sway that these principles may be effectively applied to past, present and future microfabrication technology generations. Its focus is on the underlying scientific principles of optical lithography, rather than its practice. It will serve equally well as a university textbook (each chapter has an extensive set of problems) and as an industry resource.
Much of the material contained in this book is a tutorial review of the published literature on lithography and related sciences, but a significant portion is new work, never before having been published. there is no other single book that covers the wide breadth of scientific disciplines needed in the practice of optical microlithography. The major topics covered within this text are optics (imaging and thin film interference effects), photoresist chemistry (chemical reactions, diffusion, and development phenomenon), lithography as a manufacturing process (process control, critical dimension control, and overlay), and resolution enhancement technologies.
Купить и скачать книгу "Fundamental Principles of Optical Lithography"
Похожие разделы
Смотрите также

The Institution of Engineering and Technology, 2009, 350 pages. Scope: This book provides fundamental and practical information on all aspects of GaAs processing. The book also gives pragmatic advice on cleaning and passivation, wet and dry etching and photolithography, and dry etching. Other topics covered include device performance for HBTs (Heterojunction Bipolar Transistors) and FETs (Field Effect Transistors), how these relate to processin...

Third Edition, SPIE Press, 2010, 504 pages The publication of Principles of Lithography, Third Edition just five years after the previous edition is evidence of the quickly changing and exciting nature of lithography as applied to the production of integrated circuits and other micro- and nanoscale devices. This text is intended to serve as an introduction to the science of microlithography, but also covers several subjects in depth, making i...

SPIE (Society of Photo-Optical Instrumentation Engineers): 2010. (SPIE Press Monograph Vol. PM190). - 300 pp. This book is aimed at new and experienced engineers, technology managers, and senior technicians who want to enrich their understanding of the image formation physics of a lithographic system. Readers will gain knowledge of the basic equations and constants that drive optical lithography, learn the basics of exposure systems and image for...

Okoroanyanwu U. Chemistry and Lithography

SPIE, Bellingham, Washington, 2010, 861 pages Chemistry and Lithography provides a comprehensive treatment of the chemical phenomena in lithography in a manner that is accessible to a wide readership. The book presents topics on the optical and charged particle physics practiced in lithography, with a broader view of how the marriage between chemistry and optics has made possible the print and electronic revolutions of the digital age. The rela...

Second edition. Cambridge University Press, 2006 Revised and fully updated, the Second Edition of this textbook offers a comprehensive explanation of the technology and physics of light-emitting diodes (LEDs) such as infrared, visible-spectrum, ultraviolet, and white LEDs made from III–V semiconductors. The elementary properties of LEDs such as electrical and optical characteristics are reviewed, followed by the analysis of advanced device struct...

CRC Press, 2007, 864 pages. 2nd Edition (Opitcal Science and Engineering Series). This new edition of the bestselling Microlithography: Science and Technology provides a balanced treatment of theoretical and operational considerations, from elementary concepts to advanced aspects of modern submicron microlithography. Each chapter reflects the current research and practices from the world's leading academic and industrial laboratories detailed by...