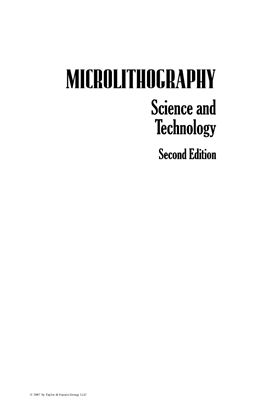 This new edition of the bestselling Microlithography: Science and Technology provides a balanced treatment of theoretical and operational considerations, from elementary concepts to advanced aspects of mode submicron microlithography. Each chapter reflects the current research and practices from the world's leading academic and industrial laboratories detailed by a stellar panel of inteational experts.

Microlithography: Science and Technology, Second Edition authoritatively covers the physics, chemistry, optics, metrology tools and techniques, resist processing and materials, and fabrication methods involved in the latest generations of microlithography such as immersion lithography and extreme ultraviolet (EUV) lithography. It also looks ahead to the possible future systems and technologies that will bring the next generations to fruition.

Loaded with illustrations, equations, tables, and time-saving references to the most current literature, this book is the most comprehensive and reliable source for anyone, from student to seasoned professional, looking to achieve robust, accurate, and cost-effective microlithography processes and systems.
Похожие разделы
Смотрите также

John Wiley & Sons, Inc., 2002, - 460 pages. The book contains nine chapters in total. The first chapter provides an overview of emerging trends in compound semiconductors and computing technology. Authors have tried to focus the book on the three emerging areas: telecommunications, quantum structures, and challenges and alternatives to CMOS technology. The balance of the book examines these three issues in detail. There are sections throughou...

Справочник
Retaining the comprehensive and in-depth approach that cemented the bestselling first edition's place as a standard reference in the field, the Handbook of Semiconductor Manufacturing Technology, Second Edition features new and updated material that keeps it at the vanguard of today's most dynamic and rapidly growing field. Iconic experts Robert Doering and Yoshio Nishi have again assembled a team of the world's leading specialists in every area...

Third Edition, SPIE Press, 2010, 504 pages The publication of Principles of Lithography, Third Edition just five years after the previous edition is evidence of the quickly changing and exciting nature of lithography as applied to the production of integrated circuits and other micro- and nanoscale devices. This text is intended to serve as an introduction to the science of microlithography, but also covers several subjects in depth, making i...

Wiley, 2008.- 534 pages. Microlithography is the main technical driving force behind one of the most important phenomenon in the history of technology - microelectronics and the incredible shrinking transistor. These dramatic increases in electronic functionality per unit cost each year for early five decades, have transformed society. The gating piece of technology in this marvel of manufacturing progress has always been the process of lithograp...

Статья
Сборник статей. Springer, 2010.- 445p. Fundamentals of III-V Semiconductor MOSFETs presents the fundamentals and current status of research of compound semiconductor metal-oxide-semiconductor field-effect transistors (MOSFETs) that are envisioned as a future replacement of silicon in digital circuits. The material covered begins with a review of specific properties of III-V semiconductors and available technologies making them attractive to MOSFE...

Second edition. Cambridge University Press, 2006 Revised and fully updated, the Second Edition of this textbook offers a comprehensive explanation of the technology and physics of light-emitting diodes (LEDs) such as infrared, visible-spectrum, ultraviolet, and white LEDs made from III–V semiconductors. The elementary properties of LEDs such as electrical and optical characteristics are reviewed, followed by the analysis of advanced device struct...