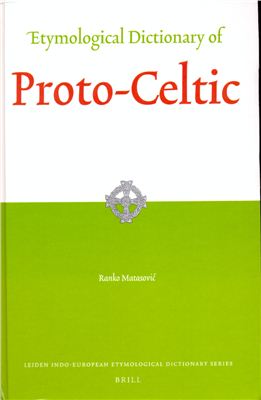 I began to work on this dictionary in May 2004, after a visit to the University of Leiden, when Sasha Lubotsky kindly invited me to participate in the "New Pokoy" project by taking care of the Celtic inherited lexicon. Feeling honoured, but also quite uncertain if I was up to the task, I accepted because I felt such a reference work was quite badly needed. Stokes' Urkeltischer Sprachschatz was published more than a century ago, and none of the other reference works on Celtic etymology provide an easy overview of the Proto-Celtic forms. I set to work when I retued to Zagreb, and within a year I produced a database of more than a thousand reconstructed Proto-Celtic words. At first my ambitions were not very high: I wanted to provide a list of reliable Celtic etymologies for Indo-Europeanists to use, largely by sifting through the various etymological proposals found in reference works published during the last half a century. The initial versions of the database thus contained almost only uncontroversial etymologies, and very few new proposals. However, it soon began apparent that adding more material and telling apart reliable etymologies from obviously false ones was impossible without a clear picture of what Proto-Celtic looked like, and so my attention was gradually shifted towards the problems of reconstruction of Proto-Celtic. This then required an in-depth study of the historical phonology of the Celtic languages and a substantial filling of the gaps in my education as a Celticist and Indo-Europeanist, so the final redaction of the dictionary was delayed for two years. Much of the work I had done previously had to be revised after I had finally decided which Proto-Celtic sound changes should be accepted. The list of the Proto-Celtic sound laws is explicitly adduced in the Introduction to the dictionary, and all etymologies in this dictionary are based on the assumption that those sound laws operated in Proto-Celtic. Although details of the list may be controversial - there simply is no consensus among scholars in all aspects of Celtic historical phonology - at least it provides a degree of consistency in the etymological treatment of words included in this dictionary.
Похожие разделы
Смотрите также

Cambridge University Press; Reissue edition, 2010. - 580 p. The Cambridge University Press published (1945-1967) in six volumes Professor Bailey's transcriptions of Saka manuscripts found in Sin Kiang and Kansu (of the ancient kingdom of Khotan). They are central to any study of Old Iranian and the Iranian dialects; and they are also important for further understanding of the religious tradition in the sacred Avesta of the Zoroastrians, and for...

Словарь
American Philosophical Society, 1990. - 573 p. This second volume of the Trukese-English Dictionary supplements the first one, published in 1980. It provides an English-Trukese index, or finderlist, for the Trukese-English of the first volume an a concordance of roots, including what appear to be complex words that cannot be analyzed into constiuent elements. Contents: Frontispiece Acknowledgments List of abbreviations Introduction Finde...

Словарь
American Philosophical Society, 1980. - 466 p. Three closely related languages are spoken in Truk State, Federated States of Micronesia: Trukese, Mortlockese, & Puluwatese. Trukese has by far the largest number of of speakers in the Truk state. Building on the dictionary by Samuel H. Elbert, published in 1947, this dictionary representes the Trukese language as it is spoken in the lagoon islands of Truk. It also includes an introduction whic...

Malzahn M. The Tocharian Verbal System. - Brill, 2010. - 1036 p. This book presents a synchronic and diachronic study of all verbal classes and categories of the Tocharian branch of Indo-European. It lists all attested Tocharian verbal forms, together with semantic and etymological information. The material has been subject to careful philological evaluation and incorporates unedited or unpublished texts of the Berlin, London, and Paris collecti...

Словарь
De Gruyter, 2010. - 599 p. About this Title * Includes words discovered in recent decades * Complete reference list of all verified sources * Reverse keyword index * Definitions in German and English (can be used by both German-speaking and English-speaking researchers) The vocabulary from the beginning of the Low German language, the period of Old Saxon, has not been captured in a modern lexicon. This dictionary provides the complete voca...

Словарь
Publication date: 2000. Number of pages: 61. This dictionary has been a long time in the making. I started working on the Thami language, called Thangmi by the people who speak it, in 1996. When I started I knew nothing about the language or the ethnic community of its speakers, and was surprised to discover that few other scholars of Nepal knew much either. As I got to know Thangmi speakers in the Dolakha and Sindhupalcok districts of central-e...