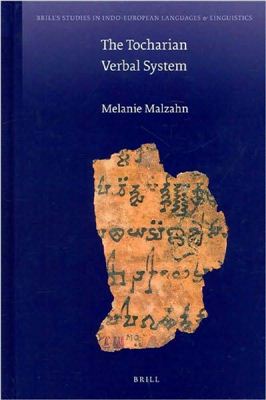 This book presents a synchronic and diachronic study of all verbal classes and categories of the
Tocharian branch of Indo-European. It lists all attested Tocharian verbal forms, together with semantic and etymological information. The material has been subject to careful philological evaluation and incorporates unedited or unpublished texts of the Berlin, London, and Paris collections. In addition, this study consistently takes into account the linguistic variation within the Tocharian B language and the relative chronology of texts. Moreover, Tocharian offers crucial evidence for the reconstruction of the PIE verbal system, and is also of interest to the general linguist for the interaction of voice and valency.
Похожие разделы
Смотрите также

(автор неизвестен) Peace Corps Vanuatu, 2010. - 20 p. Bislama is the national language of the Republic of Vanuatu. It is a pidgin derived from English, French and indigenous languages that is spoken throughout the country as the lingua franca; a common tongue which enables communication between the many different language communities of Vanuatu. There are more than one hundred recognized languages spoken in Vanuatu by the approximately 220, 00...

Terril, A. A Grammar of Lavukaleve: A Papuan Language of the Solomon Islands

Terril, A. (1999). A Grammar of Lavukaleve: A Papuan Language of the Solomon Islands. Thesis. Australian National University. 512pp. The thesis is in five major parts. The first part, Preliminaries, deals with the basic building blocks on which the grammar is founded; the introductory chapter, the phonology and the word classes. The second part of the thesis deals with arguments and adjuncts. Chapter 4 outlines Noun Phrase structure and the stru...

Cambridge University Press, 2008. - 282 pages. This book, derived from the acclaimed Cambridge Encyclopedia of the World's Ancient Languages, describes the ancient languages of Europe, for the convenience of students and specialists working in that area. Each chapter of the work focuses on an individual language or, in some instances, a set of closely related varieties of a language. Providing a full descriptive presentation, each of these chapt...