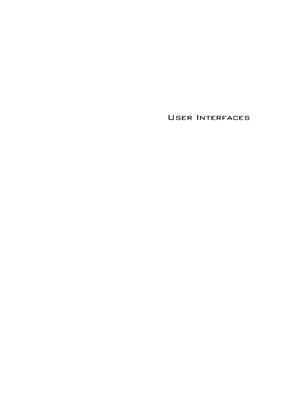 Designing user interfaces nowadays is indispensably important. A well-designed user interface promotes users to complete their everyday tasks in a great extent, particularly users with special needs. Numerous guidelines have already been developed for designing user interfaces but because of the technical development new challenges appear continuously, various ways of information seeking, publication and transmit evolve. The graphical user interface (GUI) is a standard user interface. Users interpret visual elements much faster than textual captions, and therefore the work on such interface is faster, easier and more efficient. The voice user interface (VOI) which can interpret human speech as well only existed in science fiction; now it is a reality.
With the technical development more and more mobile phones web pages applications appear. Virtual, augmented and mixed reality also begin to appear on them. There are many U.I. libraries available on the market (eg. in Java) which promote designers to create GUI-s easy. It is a hard task to satisfy Design for All Principles. Usability of hardware devices and software is examined by vast number of empirical studies on different populations. Not only usability but also user satisfaction is investigated which is influenced by several factors such as too long waiting time during the use of the system, perspicuity of the user interface, possibility of easy correction of faults and the proportion of faults, or a layout which differs from the familiar one and depends on culture. Results of the studies inform designers to create policies for designing user interfaces.
Computers and mobile devices take role in all walks of life such as in a simple search on the web, or using professional applications or in distance communication between hearing impaired people. It is important that user can apply the interface easily and technical parts do not distract their attentions from their work. Proper design of user interface can prevent users from several inconveniences in which this book is a great help. The editor would like to thank for the authors for the comprehensive and high quality researches.

Издательство Addison Wesley, 2004, -232 pp. This book is a comprehensive and authoritative guide to voice user interface (VUI) design. The VUI is perhaps the most critical factor in the success of any automated speech recognition (ASR) system, determining whether the user experience will be satisfying or frustrating, or even whether the customer will remain one. This book describes a practical methodology for creating an effective VUI design. Th...

O’Reilly ISBN: 0596154925 p. 516 From the creators of Yahoo!'s Design Pattern Library, Designing Social Interfaces provides you with more than 100 patterns, principles, and best practices, along with salient advice for many of the common challenges you'll face when starting a social website. Designing sites that foster user interaction and community-building is a valuable skill for web developers and designers today, but it's not that easy to un...

Designing a good interface isn't easy. Users demand software that is well-behaved, good-looking, and easy to use. Your clients or managers demand originality and a short time to market. Your UI technology -- Web applications, desktop software, even mobile devices -- may give you the tools you need, but little guidance on how to use them well. UI designers over the years have refined the art of interface design, evolving many best practices and re...

Jenifer Tidwell. Designing Interfaces. O'Reilly, 2010. - 575 p. - ISBN: 1449379702 Despite all of the UI toolkits available today, it's still not easy to design good application interfaces. This bestselling book is one of the few reliable sources to help you navigate through the maze of design options. By capturing UI best practices and reusable ideas as design patterns, Designing Interfaces provides solutions to common design problems that you...