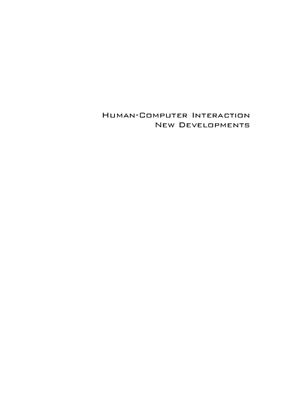 We use computers in our daily lives, sometimes becoming so engrossed in the virtual world that we stop being conscious of the computer’s presence. Computers’ increasing capabilities, such as faster processing, larger capacity, and wide-band networking, make it possible for us to interact seamlessly with them. The field of human-computer interaction is the study of interaction between people (users) and computers. It is often regarded as the intersection of computer science, behavioral science, design, psychology, sociology, and several other fields. In spite of a long history of extensive research, we have not yet achieved a full understanding of the principles and mechanisms of human-computer interaction. The study of human-computer interaction is, therefore, becoming more and more important in both the physical and cognitive aspects of designing user interfaces.
A basic goal of human-computer interaction is to improve communication between users and computers by making the interfaces more accessible and responsive to the users’ needs. Better design of the user interfaces of computer systems leads to the improved communication. A cognitive science viewpoint substantially contributes to the improvement of communication by clarifying cognitive elements of user interfaces and applying cognitive design principles. That is, cognitive information processing takes into account human performance, including psychological and physiological factors as well as physical factors, in interface design.
Knowledge transfer through communication is a form of leaing. When users manipulate computer systems, they form mental models based on the experience. This allows the users to anticipate the system’s input mechanisms, yielding highly productive interactions. When we see alteration and variety in user interfaces due to technology evolution, it may seem difficult to continue the embodiment of design principles. This book takes on the challenge of providing a forum for the dissemination and exchange of up-to-date reports on scientific trends in theoretical, generic, and applied areas of human-computer interaction. It covers topics such as universal access, engineering psychology, cognitive ergonomics, virtual and mixed reality, inteationalization, design development, online communities, social computing, human modelling, and human-centered design.