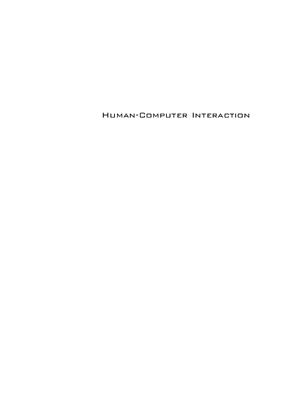 This book is an assembly of essays on state of the art concepts, methodologies, and systems in the fast moving field of human-computer interaction. Twenty?one chapters describe either progress in main themes or introduce totally new themes, never conceived before. As the use of mobile devices proliferates, a major challenge is how to present effectively visual information on a limited real-estate. K.B. Lee introduces Zoomable User Interfaces (ZUI) to address this problem.
R. Michalski examines the effect of graphical panel’s characteristics on usability. He further connects this to gender differences.
N. Juristo et al. argue that particular usability issues have a significant impact on software design and thus, need to be considered early in the development cycle, stating with the requirements formulation.
F. Naya et al. introduce Computer Aided Sketching (CASk) as a means to bridge the disconnect between CAD and the initial design stages of a product.
S. Nilsson provides a detailed account of Augmented Reality (AR) as the technology that aims to merge the real and virtual world. AR is seen not only as a productivity enhancing tool but also as an entertaining spice to the daily routine.
R. de Oliveira and H.V. da Rocha, propose multi-device design via the maintenance of a Consistency Priorities hierarchy defined in three levels. The first two levels give support to the user’s expectation, while the third level provides task personalization.
M. Ferre et al. introduce MasterFinger-2, a novel two-finger haptic interface that improves haptic interaction. The interface is based on an open architecture, which allows the control of each finger independently via Etheet.
J. Park and S.H. Park address the issue of effective visual interfaces in vehicle information systems and aircraft cockpits. The aim is to reduce cognitive workload, which is paramount to safety in vehicular and avionic applications.
D. Shastri et al. describe a new contact-free methodology to measure the cognitive load arising when the vehicle driver speaks at the same time over the cell phone. This technology opens the way for objective usability measurements in vehicular applications and more. S. Rangarajan et al. describe a novel multimodal system combining a pressure sensing floor and a visual motion capture system.
X. Ren et al. introduces the Adaptive Hybrid Cursor technique that takes advantage of pressure-sensitive input devices. In fact, pressure is used to control the zoom ratio of interface contents.
U. Seifert and J.H. Kim delve into cognitive musicology as a novel approach to human-robot interaction in artistic contexts.
B. Sener and O. Pedgley address the inadequacies of 3D CAD systems in the early (and most creative) stages of industrial design.
Y. Lu and S. Smith present a new type of e-commerce system, AR e-commerce, which visually brings virtual products into real physical environments for user interaction.
A. Song, on one chapter, focuses on the design of multi-dimensional force sensors for haptic human-computer interaction. He pays particular attention on the design principles of a novel 4 DOF force/torque sensor. On another chapter, he focuses on the design of soft haptic display devices for human-computer interaction.
F. Steinicke et al. introduce new collaborative 3D user interface concepts for everyday working environments. They describe a system that allows displaying and interacting with both mono- as well as stereoscopic content in parallel.
Y. Suh et al. present a Context-Aware Augmented Reality (CAMAR) system that supports two main functionalities. One is the intuitive and personalized control of smart appliances. The other is enabling media contents to be shared selectively an interactively among a group of people.
J. Takatalo et al. concentrate on the psychological analysis of the user experience in digital games. They present three different psychological frameworks that have been used in the study of complex environments.
E.V. Mora et al. introduce a new model to improve the quality of life of people who live with chronic diseases following Ambient Intelligence principles. The model is validated in a solution to assess heart failure patients remotely.
T. Yamaguchi et al. present SharedWell, a collaborative public and private, interactive display, suited for strategic cooperative tasks. The display enables users to dynamically choose negotiation partners, create cooperative relationships and strategically control the information they share and conceal.
Похожие разделы
Смотрите также