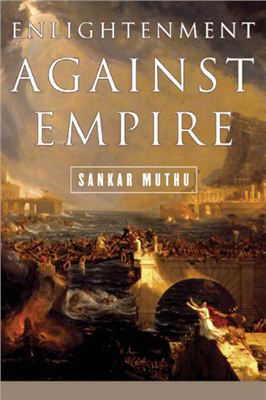 In the late eighteenth century, an array of European political thinkers attacked the very foundations of imperialism, arguing passionately that empire-building was not only unworkable, costly, and dangerous, but manifestly unjust. Enlightenment against Empire is the first book devoted to the anti-imperialist political philosophies of an age often regarded as affirming imperial ambitions. Sankar Muthu argues that thinkers such as Denis Diderot, Immanuel Kant, and Johann Gottfried Herder developed an understanding of humans as inherently cultural agents and therefore necessarily diverse. These thinkers rejected the conception of a culture-free "natural man. " They held that moral judgments of superiority or inferiority could be made neither about entire peoples nor about many distinctive cultural institutions and practices. Muthu shows how such arguments enabled the era's anti-imperialists to defend the freedom of non-European peoples to order their own societies. In contrast to those who praise "the Enlightenment" as the triumph of a universal morality and critics who view it as an imperializing ideology that denigrated cultural pluralism, Muthu argues instead that eighteenth-century political thought included multiple Enlightenments. He reveals a distinctive and underappreciated strand of Enlightenment thinking that interweaves commitments to universal moral principles and incommensurable ways of life, and that links the concept of a shared human nature with the idea that humans are fundamentally diverse. Such an intellectual temperament, Muthu contends, can broaden our own perspectives about inteational justice and the relationship between human unity and diversity.
Похожие разделы
Смотрите также

This major work of academic reference provides a comprehensive overview of the development of western political thought during the European enlightenment. Written by a distinguished team of international contributors, this Cambridge History is the latest in a sequence of volumes that is now firmly established as the principal reference source for the history of political thought. Every major theme in eighteenth-century political thought is covere...

Belknap Press of Harvard University Press, 2009. - 448 p. When Empire appeared in 2000, it defined the political and economic challenges of the era of globalization and, thrillingly, found in them possibilities for new and more democratic forms of social organization. Now, with Commonwealth, Michael Hardt and Antonio Negri conclude the trilogy begun with Empire and continued in Multitude, proposing an ethics of freedom for living in our common...

Harvard University Press, 2000. - 478 p. Empire is a sweeping book with a big-picture vision. Michael Hardt and Antonio Negri argue that while classical imperialism has largely disappeared, a new empire is emerging in a diffuse blend of technology, economics, and globalization. The book brings together unlikely bedfellows: Hardt, associate professor in Duke University's literature program, and Negri, among other things a writer and inmate at Re...

A Mixed Record, An Uncertain Future by Michael McFaul Journal of Democracy, Volume 12, Number 4, October 2001, pp. 87-94 (Article) The defeat of the Communist hard-liners’ August 1991 coup attempt marked one of the most euphoric moments in Russian history. For centuries, autocrats had ruled Russia, using force when necessary to suppress society. This time, emboldened by liberalization under Soviet leader Mikhail Gorbachev, Russian society organ...