Newell W.R. The Soul of a Leader: Character, Conviction, and Ten Lessons in Political Greatness 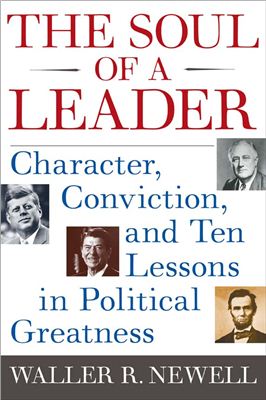 What are we looking for in a leader?

Has the meaning of leadership changed?

Can history provide guidance for the leaders of a rising generation?

What defines the soul of a leader?

In The Soul of a Leader, political scientist and cultural commentator Waller R. Newell offers a fascinating perspective on the role of leadership in American life today. From the birth of democracy in Periclean Athens to the Founding Fathers' view of statesmanship, from the experiences of Abraham Lincoln to those of mode presidents, this far-reaching and provocative new book explores the many and diverse elements of good statesmanhip, including the timeless qualities all good leaders share. As Newell plumbs the depths of history, he illuminates the moral, psychological, and intellectual resources we inherit from the traditions of the West—traditions steeped in the experience and reflection on statecraft from ancient times onward—and offers a compass for the challenges America's next generation of leaders will face.

In this engaging blend of character portraiture, historical perspective, and contemporary political insight, Newell proposes a bold new perspective on the evolution of the mode American presidency, from Franklin Roosevelt to George W. Bush. He steps back in time to evaluate the clashing models of Lincoln and Robert E. Lee, as they captured the struggle for the soul of the American Republic. And, in an essay of masterful historical reach, he contemplates the roots of mode leadership in the story of what he calls "the West's first superpower conflict"—the epic battle between Athens and Sparta, with its echoes of both Vietnam and Iraq. Finally, he draws from these stories ten lessons in political greatness—lessons the next American president will be wise to heed.
Смотрите также

Ekdale B., Namkoong K. Why blog? (then and now): exploring the motivations for blogging by popular American political bloggers

Citizens living in presidential or parliamentary systems face different political choices as do voters casting votes in elections governed by rules of proportional representation or plurality. Political commentators seem to know how such rules influence political behavior. They firmly believe, for example, that candidates running in plurality systems are better known and held more accountable to their constituencies than candidates competing in e...

Glencoe, Illinois: The Free Press, 1951. 525 pp.Psychopathology and Politics- Politics, Who Gets What, When, How. Democratic Character. В данный сборник работ вошли следующие работы Гарольда Лассуэлла: Психопатология и политики; Политика: кто получает, что, когда, как; Демократический характер. The Free Press has reprinted in one volume two of Lasswell's books, Psychopathology and Politics, first published in 1930, and Politics: Who Gets What,...

This comprehensive introduction to the major thinkers and topics in political philosophy explores the philosophical traditions which continue to inform our political judgements. Dudley Knowles introduces the ideas of key political thinkers including Hobbes, Locke, Marx and Mill and influential contemporary thinkers such as Berlin, Rawls and Nozick. He outlines central problems in political philosophy and encourages the reader to critically engage...