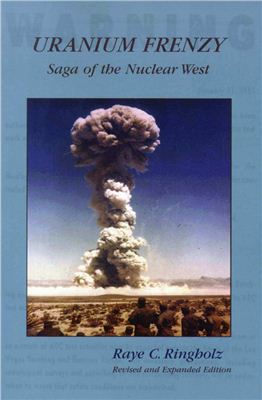 Utah State University Press, Logan, Utah, 2002, 359 pp. - ISBN 0-87421-473-4
In 1952, a currently unemployed geologist from Texas, Charlie Steen, succeeded in locating the largest deposit of high-grade uranium ore in the United States. His MiVida Mine, struck in an area thought to be unpromising, started a stampede of prospecting that was like the westward movement and the great gold rush rolled into one. It was the first and only mineral rush triggered by the U.S. govement. America, on the threshold of the nuclear age, was desperate for a domestic source of uranium. The Atomic Energy Commission was the only buyer of the ore. But it was ordinary citizens who engaged in a massive treasure hunt to satisfy the nation's needs.
Contents.
Introduction.
The Siren Call.
The European Experience.
The Dawn's Early Light.
Deadly Daughters.
Bonanza At Big Indian.
Uranium Frenzy.
Dirty Harry.
The Burden of Proof.
The Future of America.
The Colossus of Cash.
Success and Subpoenas.
The Bubble Bursts.
Leetso—The Monster That Kills.
The American Experience.
Senator Steen.
A Widow Fights Back.
Full Circle.
A Standard Is Set.
Compassionate Compensation.
Aftermath.
Notes.
Index.
Похожие разделы