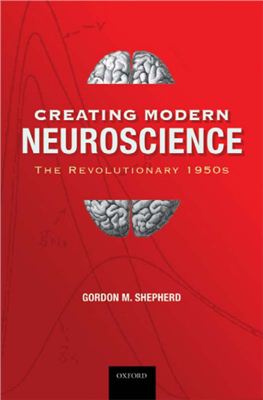 Oxford University Press, 2010. - 304 pp.
For mode scientists, history often starts with last week's jouals and is regarded as largely a quaint interest compared with the advances of today. However, this book makes the case that, measured by major advances, the greatest decade in the history of brain studies was mid-twentieth century, especially the 1950s. The first to focus on worldwide contributions in this period, the book ranges through dozens of astonishing discoveries at all levels of the brain, from DNA (Watson and Crick), through growth factors (Hamburger and Levi-Montalcini), excitability (Hodgkin and Huxley), synapses (Katz and Eccles), dopamine and Parkinson's (Carlsson), visual processing (Hartline and Kuffler), the cortical column (Mountcastle), reticular activating system (Morruzzi and Magoun) and REM sleep (Aserinsky), to stress (Selye), leaing (Hebb) and memory (HM and Milner). The clinical fields are also covered, from Cushing and Penfield, psychosurgery and brain energy metabolism (Kety), to most of the major psychoactive drugs in use today (beginning with Delay and Deniker), and much more.
The material has been the basis for a highly successful advanced undergraduate and graduate course at Yale, with the classic papers organized and accessible on the web. There is interest for a wide range of readers, academic, and lay because there is a focus on the creative process itself, on understanding how the combination of unique personalities, innovative hypotheses, and new methods led to the advances. Insight is given into this process through describing the struggles between male and female, student and mentor, academic and private sector, and the roles of chance and persistence. The book thus provides a new multidisciplinary understanding of the revolution that created the mode field of neuroscience and set the bar for judging current and future advances.
Похожие разделы
Смотрите также

Beech M. The Physics of Invisibility: A Story of Light and Deception

Springer, 2011. - 206 pp. The ability to see is fundamental to our very existence. How true our perceptions really are depends upon many factors, and not least is our understanding of what light is and how it interacts with matter. It was said that the camera, the icon of light recording instruments, never lies, and in the day of the glass plate and celluloid roll-film this might well have been true. But in this modern era, with electronic camera...

Springer, 2008. - 517 pp. Fluid Mechanics, as a scientific discipline in a modern sense, was established between the last third of the 17th century and the first half of the 18th one. This book analyses its genesis, following its evolution along two basic lines of research, which have been named the "problem of resistance" and the "problem of discharge". This approach highlights the existence of a remarkable experimental aspect in the aforementio...

World Scientific Publishing Company, 2011, 436 pages History of Modern Physical Sciences, 2 edition The book is a collection of memoirs on famous Soviet physicists of the 20th century, such as Tamm, Vavilov, Sakharov, Landau and others. The memoirs were originally written in Russian by E L Feinberg. The narrative is situated within a remarkably well-described historical, cultural and social context. Of special interest are the chapters devoted...

Статья. Опубликована в ICON. Journal of International Committee for the History of Technology, 2007. Vol. 13 (0,7 а. л. ). Problems of Research. Methodological Analysis of the History of RADAR Science and Technology as a Scientific and Technological Discipline. A Modern Scientific-Technological Disciplines. Development of a New Research Trend in Radio Engineering (1930’s—1940’s). Origination: scientific investigation and invention – experiment t...

Jammer M. Concepts of Simultaneity: From Antiquity to Einstein and Beyond

Johns Hopkins University Press, 2006. - 308 pp. Max Jammer's "Concepts of Simultaneity" presents a comprehensive, accessible account of the historical development of an important and controversial concept - which played a critical role in initiating modern theoretical physics - from the days of Egyptian hieroglyphs through to Einstein's work in 1905, and beyond. Beginning with the use of the concept of simultaneity in ancient Egypt and in the Bib...

Meli D.B. Thinking with Objects: The Transformation of Mechanics in the Seventeenth Century

The Johns Hopkins University Press, 2006, 389 pages Thinking with Objects offers a fresh view of the transformation that took place in mechanics during the 17th century. By giving center stage to objects—levers, inclined planes, beams, pendulums, springs, and falling and projected bodies—Domenico Bertoloni Meli provides a unique and comprehensive portrayal of mechanics as practitioners understood it at the time. Bertoloni Meli reexamines su...

Cambridge University Press, 2006. - 839 pp. Review "This book is an excellent source for current thinking on Early Modern Science. The chapters are writtten by the leading shcolars n their respective fields. This book, along with the rest of the Cambridge History of Science series, belongs in all academic and large public libraries." - American Reference Books Annual "The real value of the volume, in my eyes at least, is its contribution to _ea...

Forty-two essays by authors from five continents and many disciplines provide a synthetic account of the history of the social sciences-including behavioral and economic sciences since the late eighteenth century. The authors emphasize the cultural and intellectual preconditions of social science, and its contested but important role in the history of the modern world. While there are many historical books on particular disciplines, there are ver...

Academic Press, 1998 - 433 p. Product Description: This book is the second volume of autobiographical essays by distinguished senior neuroscientists it is part of the first collection of neuroscience writing that is primarily autobiographical. As neuroscience is a young discipline, the contributors to this volume are truly pioneers of scientific research on the brain and spinal cord. This collection of fascinating essays should inform and inspir...

Turnbull David. Masons, Tricksters and Cartographers: Comparative Studies in the Sociology of Scientific and Indigenous Knowledge

Taylor & Francis, 2000 - 276 p. In an eclectic and highly original study, Turnbull brings together traditions as diverse as cathedral building, Micronesian navigation, cartography and turbulence research. He argues that all our differing ways of producing knowledge - including science - are messy, spatial and local. Every culture has its own ways of assembling local knowledge, thereby creating space thrugh the linking of people, practices a...