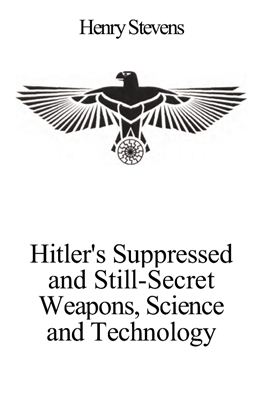 Now we know what spooked the Allies in the closing months of the war and why they were in such a panic to win quickly. The Allies assembled intelligence reports of supermetals, electric guns, and ray weapons able to stop the engines of Allied aircraft in addition to their worst fears of x-ray and laser weaponry. Then there were the bombs. Contained in this book are reports of structured bombs of nipolit, N-stoff bombs, cold bombs, oxygen bombs which destroyed all life, atomic bombs and rumors of the mysterious molecular bomb. The true history of the fuel-air bomb is revealed by our own military. There is even a probability that the SS black alchemists of the 3rd Reich were experimenting with red mercury bomb technology. This book documents very large mystery rockets under development in Germany, far beyond the V-
2. Technological history is also examined. Guess who invented the computer, magnetic tape and computer programs? How about refining crude oil using sound waves or producing gasoline for 11 cents per gallon or the synthetic penicillin substitute, "3065"? Very exotic technologies are also discussed including German experiments in time, sustained fusion reactions, zero point energy and travel in deep space. Chapters include: The Kammler Group German Flying Disc Update (Witness to a German Flying Disc) The Electromagnetic Vampire Liquid Air Synthetic Blood German Free Energy Research German Atomic Tests "Project Hexenkessel" The Fuel-Air Bomb Supermetals Red Mercury Means To Stop Engines Magnetic Wave-Motorstoppmittel "Death Rays" Distillation of Crude Oil Using Sound Waves What is Happening in Antarctica? Large German Mystery Rockets Experiments in Time tons more.

1001 Amazing Tech Facts: Trivia that gives you the edge

Author: Seagate. Publisher: Jasubhai Digital, 2004. - 121 pages. In 1981, in an apparent moment of epiphany, William Henry Gates III told a gathering that in the future 640 KB of RAM ought to be enough for anybody. Today, Gates, one of the richest men in the universe, makes most of his money selling software so heavy even a Sumo wrestler would blush. Ergo, even the most successful, or foresighted, people in the world are not infallible. Twenty-t...

Baggott J. The Quantum Story: A History in 40 Moments

Oxford University Press, 2011, 469 pages Utterly beautiful. Profoundly disconcerting. Quantum theory is quite simply the most successful account of the physical universe ever devised. Its concepts underpin much of the twenty-first century technology that we now take for granted. But at the same time it has completely undermined our ability to make sense of the world at its most fundamental level. Niels Bohr claimed that anybody who is not shoc...

Bernstein J. Plutonium: A History of the World's Most Dangerous Element

Joseph Henry Press, 2007. - 194 pp. Plutonium was the heaviest natural element found in minute amounts of pitchblende in the mining area of Saxony, Germany, at the beginning of the 20th century. The radioactive substance is now overwhelmingly prevalent, and because of its extensive half-life, it poses an environmental threat. Intrigued by its bizarre chemical and physical properties and its subsequent role in nuclear reactions, physicist Bernstei...

Bunch Bryan, Hellemans Alexander. The History of Science and Technology: A Browser's Guide to the Great Discoveries, Inventions, and the People Who MadeThem from the Dawn of Time to Today

Houghton Mifflin Harcourt, 2004 - 784 p. ISBN10: 0618221239 ISBN13: 9780618221233 (eng) In this age of genetic engineering and global warming, it is more important than ever to understand the history and current trends of science and technology. With so much information out there, though, it’s hard to know where to start. That’s where The History of Science and Technology ? the most comprehensive and up-to-date chronology of its kind comes in. F...

Cassidy D.C. Beyond uncertainty: Heisenberg, quantum physics, and the bomb

Bellevue Literary Press, 2009. - 480 pp. In 1992, David C. Cassidy's groundbreaking biography of Werner Heisenberg, "Uncertainty, " was published to resounding acclaim from scholars and critics. Since the fall of the Soviet Union, long-suppressed information has emerged on Heisenberg's role in the Nazi atomic bomb project. In "Beyond Uncertainty, " Cassidy interprets this and other previously unknown material within the context of his vast resear...

Дисертация
Los Alamos National Laboratory, New Mexico, Virginia Polytechnic Institute, 1999, 340 pp. This thesis (for the degree of Doctor of Philosophy) was accepted by the Department of Philosophy, Virginia Polytechnic Institute and State University. The American system of nuclear weapons research and development was conceived and developed not as a result of technological determinism, but by a number of individual architects who promoted the growth of th...

Статья. Опубликована в ICON. Journal of International Committee for the History of Technology, 2007. Vol. 13 (0,7 а. л. ). Problems of Research. Methodological Analysis of the History of RADAR Science and Technology as a Scientific and Technological Discipline. A Modern Scientific-Technological Disciplines. Development of a New Research Trend in Radio Engineering (1930’s—1940’s). Origination: scientific investigation and invention – experiment t...

Henry Petroski. The Pencil: A History of Design and Circumstance

Publisher: K.n.o.p.f 1992 | 448 Pages | ISBN: 0679734155 | PDF | 6 MB Like most other human artifacts, the common pencil, made and sold today by the millions, has a long and complex history. Henry Petroski, who combines a talent for fine writing with a deep knowledge of engineering and technological history, examines the story of the pencil, considering it not only as a thing in itself, but also as an exemplar of all things that are designed and...

Russo L. Forgotten Revolution: How Science Was Born in 300 BC and Why It Had to Be Reborn

Basic Books, 2001 - 336 p. ISBN10: 0738205850 ISBN13: 9780738205854 (eng) In this book, Mark Walker - a historical scholar of Nazi science - brings to light the overwhelming impact of Hitler's regime on science and, ultimately, on the pursuit of the German atomic bomb. Walker meticulously draws on hundreds of original documents to examine the role of German scientists in the rise and fall of the Third Reich. He investigates whether most German s...