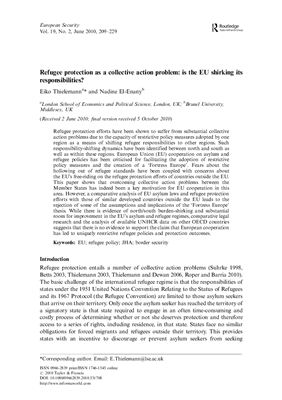 Refugee protection efforts have been shown to suffer from substantial collective action problems due to the capacity of restrictive policy measures adopted by one region as a means of shifting refugee responsibilities to other regions. Such responsibility-shifting dynamics have been identified between north and south as well as within these regions. European Union (EU) cooperation on asylum and refugee policies has been criticised for facilitating the adoption of restrictive policy
measures and the creation of a ‘Fortress Europe’. Fears about the hollowing out of refugee standards have been coupled with conces about the EU’s free-riding on the refugee protection efforts of countries outside the EU.
Похожие разделы
Смотрите также

Статья
Institute of Race Relations Vol. 47(1): 64–91 Abstract: Issues of immigration, asylum and refugee rights have become targets for politicians of all persuasions across Europe, from social democrats to the far Right. Ever-increasing pressure, spearheaded by populist media and electioneering politicians, to reduce the numbers of those seeking asylum, to raise the bar for successful claims and return those whose claims have ‘failed’ has resulted in...

Mayerfeld J.Who Shall Be Judge? :The United States, the InternationalCriminal Court, and the Global Enforcement of Human Rights

Статья
Human Rights Quarterly 25 (2003) 93–129 © 2003 by The Johns Hopkins University Press The International Criminal Court, empowered to prosecute individuals guilty of the worst human rights atrocities, has encountered firm resistance from the United States. Underlying this dispute is a clash between two different models for achieving the global enforcement of human rights: a collective enforcement model exemplified by the Court, and a unidirectiona...

The Author (2005). Published by Oxford University Press. 56 pages. Abstract: The European Union Qualification Directive is the first supranational instrument to seek to harmonize complementary protection (termed ‘subsidiary protection’ in the EU). Though it has shifted complementary protection beyond the realm of ad hoc domestic practices to a codified regime, it entrenches a protection hierarchy that unjustifiably differentiates between the rig...

Szczepanikova A. From the Right of Asylum to Migration Management: The Legal-Political Construction of ‘a Refugee’ in the Post-Communist Czech Republic

Статья
The article. Europe-Asia Studies Vol. 63, No. 5, July 2011, 789–806 Abstract: International law defines refugees and their rights and the legal obligations of states that receive them. However, the actual formulation and implementation of asylum law are based on the politically and historically contingent constructions of the status of ‘refugee’ that are determined largely by nation states. This article analyses the legal–political construction...