Tucker S.C. The Encyclopedia of the Spanish-American and Philippine-American Wars 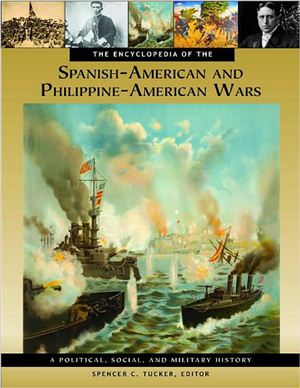 Spencer C. Tucker. The Encyclopedia of the Spanish-American and Philippine-American Wars: A Political, Social, and Military History. ABC-CLIO, 2009. - 1042 p.

Preface
The conflict with Spain in 1898 was the first U.S. war with a foreign power since the Mexican-American War of 1846-1848. The Spanish-American War was, of course, about much more than freeing Cuba and the explosion of the battleship Maine. What Secretary of State John Hay called "a splendid little war" ended with the United States becoming a world power.
The American people were united behind the war effort, probably more so than in any other war in our history. There was, however, disagreement over the decision to take the Philippines and controversy resulting from the ensuing fighting against those Filipinos who did not wish to simply trade one colonial master for another. Yet Americans generally applauded the results. And when all was said and done, the United States probably had as fine a record in the Philippines as any colonial power in history. Ironically, the acquisition of the Philippines affected the future of the United States far more than any other provision of the Treaty of Paris that ended the Spanish-American War. Cuba was made independent, Puerto Rico was gradually advanced to Commonwealth status, but the Philippines made the United States a Far Easte power, involved it in Asiatic power struggles, and made an eventual war with Japan probable. The seeds of Pearl Harbor came from the Battle of Manila Bay. Thus, the annexation of the Philippines was a major tuing point in American history.
The war also had far-reaching repercussions for the U.S. Navy. Indeed, its remarkable record in the war fueled sentiment for an Isthmian canal and more ships. By 1917 the United States had the third-largest navy in the world and was administering the Panama Canal, which it had built from 1904 to 1914. It had also become a global power and the world's leading industrial and financial center.
This encyclopedia is the most comprehensive to date on the Spanish-American War and the Philippine-American War. In addition to the volume of documents, the encyclopedia has more than 600 entries covering a wide range of topics on both sides of the conflict. In keeping with encyclopedias in this ABC-CLIO series, we have endeavored to include not only military events, leaders, and weapons but also entries treating political, diplomatic, economic, social, and cultural leaders and events.
There are many people to thank. I am especially grateful to David Task for writing the excellent introduction. I first encountered David at the Military History Workshop at West Point in the summer of 1980 when I was attending the workshop and David was a guest lecturer. His painstakingly researched and elegantly written book The War with Spain in 1898, first published in 1981 and reprinted many times, remains the classic study of the conflict. He provides a splendid overview and analysis of the factors behind the conflict, the war, and the consequences. As always, associate editor Paul Pierpaoli Jr. has been a tremendous assist. A trained diplomatic and political historian, he has not only helped edit all the entries but has written a number himself. I am also delighted to have the services of two assistant editors, Jack McCallum and Justin Murphy, who also have read all the entries and helped catch myriad small problems. Both received their doctorates under my direction, and I am inordinately proud of them. Jack is also a well-known neurosurgeon and author of a splendid new biography of General Leonard Wood. Justin, a distinguished teacher and scholar who has assisted me on several encyclopedia projects and is an accomplished editor, is now also acting dean at Howard Payne University. I am also most appreciative of the efforts of the many scholars who contributed to this project. And I am especially grateful to Becky Snyder, president of ABC-CLIO, for her vision, encouragement, support, and friendship and to my good friends and team colleagues at ABC-CLIO Pat Carlin, Andrew Mc-Cormick, and Maxine Taylor. As usual, I take full responsibility for any errors. Finally, my perennial thanks to my wife and partner Dr. Beverly Tucker, whose support enables me to continue writing and editing.
Похожие разделы
Смотрите также

ABC-Clio, 2002 - 771 p. ISBN10: 2276073459 ISBN13: 9781576073452 (eng) This encyclopedia of war in the air documents the entire history of aerial combat - from the primitive biplanes of World War I to the sophisticated stealth fighters of the 21st century. More than 100 scholars and experts - many with personal combat experience - offer researched articles on the famous aces, designers, battles, air campaigns, weapons and flying machines of air...

Энциклопедия
ABC-Clio Inc., 1998 - 370 p. Encyclopedia of Greco-Roman Mythology presents over 1,400 comprehensive A–Z entries of the myths and legends of ancient Greece and Rome. The entries are cross-referenced where appropriate, and an extensive bibliography is provided. Entries include Heracles and Alexander the Great, and geographical features such as the islands of the Blessed and Dardanelles. An unusual feature of this dictionary is the inclusion of as...

Энциклопедия
New Edition. Publisher: Facts On File, Inc., New York, 2005. 698 pages. Language: English. Fully updated and revised with more than 50 percent new material, Encyclopedia of Censorship, New Edition presents a full range of information about the history and evolution of censorship and its role in society today. Covering all forms of expression from the past to the present, from the office of the censor in ancient Rome to the Internet in the comput...

Lyon Peter. Conflict between India and Pakistan. An Encyclopedia

Publisher: ABC-CLIO, Inc., USA, 2008. 277 pages. Language: English. This encyclopedia is about relations between India and Pakistan from 1947 to today, and it endeavors to trace and account for the principal vicissitudes in these relations in their several dimensions — political, military, economic, and cultural. It does not purport to be a detailed account of all aspects of India and/or Pakistan in these years, but it does make occasional refer...

Shaked Shaul. A Dictionary of Aramaic Ideograms in Pahlavi

Статья
Journal of the American Oriental SocietyVol. 113, N. 1, (Jan. - Mar., 1993), 75- 81. Review Articles A review article of: Frahang i Pahlavik, edited by Bo Utas, with transliteration, transcription and commentary from the posthumous papers of Henrik Samuel Nyberg, with the collaboration of Christopher Toll.

Энциклопедия
Routledge, 2004 - 1912 p. 3-Volume Product Description: Covering the entire continent from Morocco, Libya, and Egypt in the north to the Cape of Good Hope in the south, and the surrounding islands from Cape Verde in the west to Madagascar, Mauritius, and Seychelles in the east, the Encyclopedia of African History is a new A-Z reference resource on the history of the entire African continent. With entries ranging from the earliest evolution of h...

Tucker S.C. (editor) The Encyclopedia of Middle East Wars: The United States in the Persian Gulf, Afghanistan, and Iraq Conflicts

ABC-CLIO, 2010. - 2269 pages. Since the end of World War II the United States has had a troubled relationship with the Middle East. The superpower competition of the Cold War, the establishment of the State of Israel, the rise of militant Islam, the aggressiveness of authoritarian regimes, the dependency on Middle East oil, and a host of other factors have caused the United States to become involved in numerous regional confrontations, containme...

Энциклопедия
ABC-CLIO, 2002. - 1231 pages. Three volumes. 1,500 entries. 2,500 years of history. Seven seas. It all adds up to Naval Warfare: An International Encyclopedia, the most authoritative, comprehensive, and accessible reference work on the subject of combat at sea. Spencer C. Tucker, editor of the award winning Encyclopedia of the Vietnam War, turns his expertise in military history to the greatest war story of them all — humanity's centuries-old qu...

Routledge, 2009 - 552 p. ISBN10: 0415994756 ISBN13: 9780415994750 (eng) American Women during World War II documents the lives and stories of women who contributed directly to the war effort via official and semi-official military organizations, as well as the millions of women who worked in civilian defense industries, ranging from aircraft maintenance to munitions manufacturing and much more. It also illuminates how the war changed the lives o...