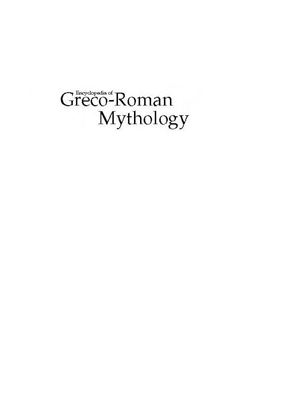 Encyclopedia of Greco-Roman Mythology presents over 1,400 comprehensive A–Z entries of the myths and legends of ancient Greece and Rome. The entries are cross-referenced where appropriate, and an extensive bibliography is provided. Entries include Heracles and Alexander the Great, and geographical features such as the islands of the Blessed and Dardanelles. An unusual feature of this dictionary is the inclusion of astronomical data, linking the myths and legends to the celestial objects named after them. Diverse characters and events from related traditions—Greco-Egyptian, Roman-Celtic, and more—round out the volume.
Students of classical Greek and Roman traditions, librarians, and general readers will tu to this volume again and again for authoritative information on the myths and legends of these ancient cultures.

ABC-Clio, 2002 - 771 p. ISBN10: 2276073459 ISBN13: 9781576073452 (eng) This encyclopedia of war in the air documents the entire history of aerial combat - from the primitive biplanes of World War I to the sophisticated stealth fighters of the 21st century. More than 100 scholars and experts - many with personal combat experience - offer researched articles on the famous aces, designers, battles, air campaigns, weapons and flying machines of air...

Энциклопедия
New York, London: Routledge, 2005. - 546 p. ISBN 0-415-94052-4 (hb: alk. paper) Medieval Ireland: An Encyclopedia presents the multiple facets of life in Ireland before and after the Anglo-Norman invasion of 1169, from the sixth to the sixteenth century. It provides reliable, scholarly information for the student, scholar, or general reader who wishes to learn more about this vivid period of history. The medieval period in Ireland was rich in cul...

Энциклопедия
New Edition. Publisher: Facts On File, Inc., New York, 2005. 698 pages. Language: English. Fully updated and revised with more than 50 percent new material, Encyclopedia of Censorship, New Edition presents a full range of information about the history and evolution of censorship and its role in society today. Covering all forms of expression from the past to the present, from the office of the censor in ancient Rome to the Internet in the comput...

Lyon Peter. Conflict between India and Pakistan. An Encyclopedia

Publisher: ABC-CLIO, Inc., USA, 2008. 277 pages. Language: English. This encyclopedia is about relations between India and Pakistan from 1947 to today, and it endeavors to trace and account for the principal vicissitudes in these relations in their several dimensions — political, military, economic, and cultural. It does not purport to be a detailed account of all aspects of India and/or Pakistan in these years, but it does make occasional refer...

Энциклопедия
Routledge, 2004 - 1912 p. 3-Volume Product Description: Covering the entire continent from Morocco, Libya, and Egypt in the north to the Cape of Good Hope in the south, and the surrounding islands from Cape Verde in the west to Madagascar, Mauritius, and Seychelles in the east, the Encyclopedia of African History is a new A-Z reference resource on the history of the entire African continent. With entries ranging from the earliest evolution of h...

Thompson William N. Gambling in America: An Encyclopedia of History, Issues, and Society

ABC-CLIO, 2001 - 508 p. Whether they're called "gaming" by the industry's supporters or "gambling" by its opponents, games of chance have always exerted a powerful pull. Every human society has indulged in some form of gambling and, ironically, has also tried to prohibit or limit it. In this comprehensive, objective look at gamblinga€its people, places, and events its laws and policies its games and equipmenta€scholar William N. Thompson traces...

Энциклопедия
Enigma Books, 2009 - 612 p. ISBN10: 1929631758 ISBN13: 9781929631759 (eng) The cold war officially lasted from 1945 to 1991 however, many operations and individual spies often are found beyond these dates, with some previously unknown operations and names having surfaced only recently. Based on all the latest research, the core part of the book consists of over 330 individual entries that include biographical accounts of the lives and operations...

Энциклопедия
ABC-CLIO, 2002. - 1231 pages. Three volumes. 1,500 entries. 2,500 years of history. Seven seas. It all adds up to Naval Warfare: An International Encyclopedia, the most authoritative, comprehensive, and accessible reference work on the subject of combat at sea. Spencer C. Tucker, editor of the award winning Encyclopedia of the Vietnam War, turns his expertise in military history to the greatest war story of them all — humanity's centuries-old qu...

Tucker S.C. The Encyclopedia of the Spanish-American and Philippine-American Wars

Энциклопедия
Spencer C. Tucker. The Encyclopedia of the Spanish-American and Philippine-American Wars: A Political, Social, and Military History. ABC-CLIO, 2009. - 1042 p. Preface The conflict with Spain in 1898 was the first U.S. war with a foreign power since the Mexican-American War of 1846-1848. The Spanish-American War was, of course, about much more than freeing Cuba and the explosion of the battleship Maine. What Secretary of State John Hay called "a...