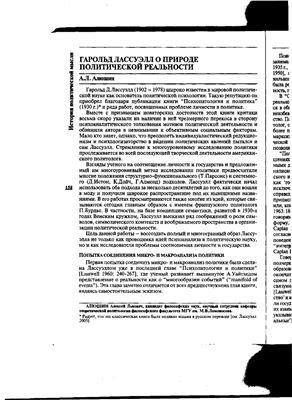 Harold Lasswell (1902 - 1978) is widely known in the world political science as the founder of political psychology. It was, in particular, thanks to a monograph published in 1930, Psychopathology and Politics, that he acquired that reputation. While acknowledging the book's merits, critics very soon pointed to the bias being observed in it, towards psychoanalytical interpretation of political activity's motives, and to its inattention to large-scale and objective social factors. What is less known is that Lasswell himself, too, sought to overcome the individualistic reductionism and the psychologizationism in the vision of political phenomena. Basing himself on the ideas of A.Whitehead and of the Vienna circle, he proposed the concept of political reality as the multivariety of events. It is demonstrated in the article that Lasswell's views on correlation of person and the state, as well as the multilevel method of researching political reality, that he proposed, were anticipating many positions of the structural-functional and the systemic approaches several decades before their wide spread.
Похожие разделы
Смотрите также