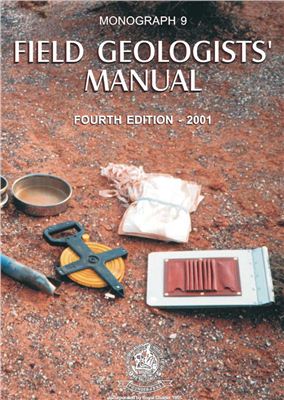 This manual is intended to provide, in one volume, a broad selection of basic material which may be required by
a geologist during the course of his work. It is an attempt, with some personal bias, to abstract those critical parts of
a reference library (to which all geologists require reasonable access) which may be of use during short term field
projects. Obviously a geologist on a major and long term field investigation should have access to a number of
textbooks to supplement the minimal data supplied here, and be provided with specific detailed material relating to
the particular enquiry. Specialists may find that their individual area of knowledge has been only briefly covered,
but as far as possible classifications which are widely accepted have been used—and these are often the simplest.
This is not intended to be another textbook or recipe book, as in many cases the preliminary steps are not
explained, and a standard of training or scholarship is assumed. The sources of individual sections (shown as
footnotes), and several bibliographies, have been added for further reference. In some instances established or most
suitable procedures are included where these are not readily available or not usually known. For topics in which
employers or individuals have a standardised routine (e.g. the description of outcrops), only categories of
information which should be recorded have been listed.
The first draft of the manual was compiled over a period of five years, with considerable help in areas of
specialised knowledge from the staff of the Bureau of Mineral Resources (for geological mapping, geophysics), the
Geological Survey of New South Wales (for engineering geology, geohydrology) and Tennant Trading (Aust. ) Pty.
Ltd. (for commercial factors for common ores). With financial support from the Sydney Branch of The Institute,
65 copies of the first draft were produced, and circulated to the major Australian geological organisations in order
to obtain an indication of the likely demand for the manual, and the type of information which should be included.
The concept was generally favourably received, and a wide variety of alteative and additional information was
contributed. Aid from those organisations which offered further material is acknowledged opposite as a list of
cooperating organisations.
The final draft, incorporating most of these suggestions, was composed with the advice of K R Glasson,
M J Lawrence, and K G Mosher of the Sydney Branch Committee of The Institute. The volume was prepared for
printing by W R Ryall, and edited by him with my assistance, based on advice readily provided by The Institute
Honorary Editor, J T Woodcock. I am obliged to the Council and Sydney Branch Committee of The Institute, and
to the CSIRO Minerals Research Laboratories, for the financial support which made possible the publication of the
manual.
I am particularly grateful to my employer, Australian Oil and Gas Corporation Limited, for encouragement and
aid with this project from its inception.
Похожие разделы
Смотрите также

Chapman M.G. The Geology of Mars

Research into the geological processes operating on Mars relies on interpretation of images and other data returned by unmanned orbiters, probes and landers. Such interpretations are based on our knowledge of processes occurring on Earth. Terrestrial analog studies therefore play an important role in understanding the geological features observed on Mars. This is the first book to present direct comparisons between locales on Earth and Mars, and...

Изд-во Springer, 2010. 832p. This book presents a summary of the geology of the Transantarctic Mountains for Earth scientists who may want to work there or who need an overview of the geologic history of this region. In addition, the properties of the East Antarctic ice sheet and of the meteorites that accumulate on its surface are treated in separate chapters. The presentation ends with the Cenozoic glaciation of the Transantarctic Mountains inc...

The fall of the Soviet Union and the subsequent opening of its borders to western oil companies have seen the search for oil turn increasingly to the 'east'. The London Petrophysical Society, chapter of the SPWLA, decided to create this formation evaluation manual specifically to help explorationists and geoscientists who have been brought up on a diet of high-quality, abundant North Sea data, to understand and interpret 'Russian-Style' logs. In...

Mansfield E.H. The Bending and Stretching of Plates

Cambridge University Press, 2005, ISBN-0521018161. Written by one of the world's leading authorities on plate behavior, this study gives a clear physical insight into elastic plate behavior. Small-deflection theory is treated in Part 1 in chapters dealing with basic equations: including thermal effects and multi-layered anisotropic plates, rectangular plates, circular and other shaped plates, plates whose boundaries are amenable to conformal tra...

Springer, 2004, 324 Pages Volcanic eruptions are the clear and dramatic expression of dynamic processes going on in planet Earth. The author, one of the most profound specialists in the field of volcanology, explains in a concise and easy to understand manner the basics and most recent findings in the field of volcanology. Based on over 300 color figures and the model of plate tectonics the book offers an insight in the generation of magmas and...

McGraw-Hill Professional, 2004. - 350 pages. Now anyone with an interest in earth science can master it -- without formal training, unlimited time, or a genius IQ. In Earth Science Demystified, scientist and writer Linda Williams provides an effective, anxiety-soothing, and painless way to learn or review earth science fundamentals. With "Earth Science Demystified, you master the subject one step at a time -- at your own speed. This unique self-...