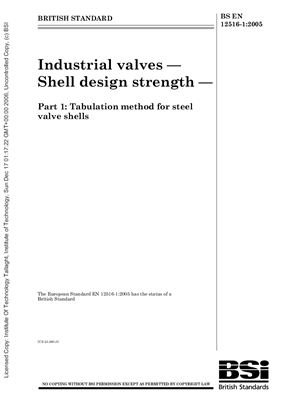 114 cтр.
The European Standard EN 12516-1:2005 has the status of a British Standard
This European Standard was approved by CEN on 15 March 2005.
This document (EN 12516-1:2005) has been prepared by Technical Committee CEN/TC 69 Industrial valves, the secretariat of which is held by AFNOR. This European Standard shall be given the status of a national standard, either by publication of an identical text or by endorsement, at the latest by October 2005, and conflicting national standards shall be withdrawn at the latest by October 2005.
This document has been prepared under a mandate given to CEN by the European Commission and the European Free Trade Association, and supports essential requirements of EU Directive. EN 12516, Industrial Valves — Shell Design strength, is in four parts. Parts 1 and 2 specify methods for determining the thickness of steel valve shells by tabulation or calculation methods respectively. Part 3 establishes an experimental method for assessing the strength of valve shells in steel, cast iron and copper alloy as a type test by applying an elevated hydrostatic pressure at ambient temperature. Part 4 specifies a method for calculating the thickness for valve shells in metallic material other than steel. The tabulation method, Part 1 is similar in approach to ASME B16.34 in that the designer can look up the required minimum wall thickness dimension of the valve body from a table. The inteal diameter of the straight pipe, into which the valve is to be mounted, gives the reference dimension from which the tabulated wall thickness of the body are calculated. It applies only to valve bodies, bonnets and covers with essentially circular cross-section. For valve shells with oval or rectangular shapes and for additional loads, EN 12516-2 should be used (see 8.6).
Похожие разделы
Смотрите также

Стандарт
14 cтр. The European Standard EN 10246-12:2000 has the status of a British Standard February 2000 This part of EN 10246 specifies the requirements and the acceptance levels for magnetic particle inspection of seamless and welded ferromagnetic steel tubes for the detection of surface imperfections. This part of EN 10246 is to be used for the detection of surface imperfections on the entire or any part of the outer surface of tubes, excluding the e...

Стандарт
16 стр. The European Standard EN 10246-14:1999 has the status of a British Standard November 1999 This Part of EN 10246 specifies requirements for automatic ultrasonic testing of seamless and welded steel tubes, with the exception of submerged arc welded (SAW) tubes, for the detection of laminar imperfections. The standard specifies acceptance levels and calibration procedures. NOTE : An alternative test method for the detection of laminar imperf...

Стандарт
This European Standard was approved by CEN on 1 August 2002. 16p. This standard establishes an experimental method of assessing the strength of valve shells by applying an elevated hydrostatic pressure test at room temperature.

Стандарт
This European Standard specifies the design, construction, equipment, operational and water treatment requirements drawn up with a view to ensuring the operating safety of new stationary shell boiler plants.

Стандарт
This Part of this European Standard specifies requirements for the design and calculation of pressure parts of shell boilers as defined in EN 12953-1.