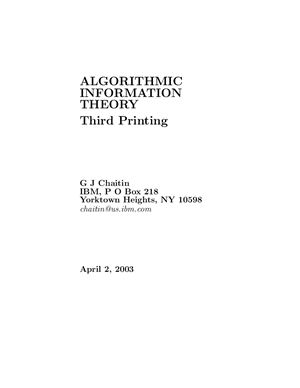 The aim of this book is to present the strongest possible version of G?del's incompleteness theorem, using an information-theoretic approach based on the size of computer programs.

Although the ideas in this book are not easy, this book has tried to present the material in the most concrete and direct fashion possible. It gives many examples, and computer programs for key algorithms. In particular, the theory of program-size in LISP presented in Chapter 5 and Appendix B, which has not appeared elsewhere, is intended as an illustration of the more abstract ideas in the following chapters.
Смотрите также

Pages : 115 Publication Date : Oct 1997 Document Summary: This paper deals with complexity issues in the theory of linear error-correcting codes. Algorithmic problems that this paper study are constructing good codes, encoding and decoding them. According to their complexity, problems are divided into easy, i.e., polynomial in the length n of the code, and difficult, i.e., exponential ones. The first part deals with easy problems. This paper...

Издательство World Scientific, 1997, -534 pp. God not only plays dice in quantum mechanics, but even with the whole numbers! The discovery of randomness in arithmetic is presented in my book Algorithmic Information Theory published by Cambridge University Press. There I show that to decide if an algebraic equation in integers has finitely or infinitely many solutions is in some cases absolutely intractable. I exhibit an infinite series of such a...

Издательство Springer, 2009, -274 pp. It is commonly assumed that computers process information. But what is information? In a technical, important, but nevertheless rather narrow sense, Shannon’s information theory gives a first answer to this question. This theory focuses on measuring the information content of a message. Essentially this measure is the reduction of the uncertainty obtained by receiving a message. The uncertainty of a situatio...