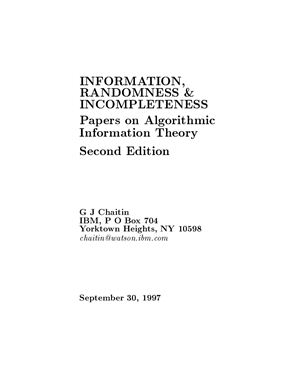 God not only plays dice in quantum mechanics, but even with the whole numbers! The discovery of randomness in arithmetic is presented in my book Algorithmic Information Theory published by Cambridge University Press. There I show that to decide if an algebraic equation in integers has finitely or infinitely many solutions is in some cases absolutely intractable. I exhibit an infinite series of such arithmetical assertions that are random arithmetical facts, and for which it is essentially the case that the only way to prove them is to assume them as axioms. This extreme form of G?del incompleteness theorem shows that some arithmetical truths are totally impervious to reasoning.
The papers leading to this result were published over a period of more than twenty years in widely scattered jouals, but because of their unity of purpose they fall together naturally into the present book, intended as a companion volume to my Cambridge University Press monograph. I hope that it will serve as a stimulus for work on complexity, randomness and unpredictability, in physics and biology as well as in metamathematics.
For the second edition, I have added the article Randomness in arithmetic (Part I), a collection of abstracts (Part VII), a bibliography (Part VIII), and, as an Epilogue, two essays which have not been published elsewhere that assess the impact of algorithmic information theory on mathematics and biology, respectively. I should also like to point out that it is straightforward to apply to LISP the techniques used in Part VI to study bounded-transfer Turing machines. A few footnotes have been added to Part VI, but the subject richly deserves book length treatment, and I intend to write a book about LISP in the near future.

Publisher: Cambridge University Press ISBN: 0521343062 Pages : 236 Publication Date : April 2, 2003 Book Excerpts: The aim of this book is to present the strongest possible version of G?del's incompleteness theorem, using an information-theoretic approach based on the size of computer programs. One half of the book is concerned with studying Omega, the halting probability of a universal computer if its program is chosen by tossing a coin....

Издательство Springer, 2009, -274 pp. It is commonly assumed that computers process information. But what is information? In a technical, important, but nevertheless rather narrow sense, Shannon’s information theory gives a first answer to this question. This theory focuses on measuring the information content of a message. Essentially this measure is the reduction of the uncertainty obtained by receiving a message. The uncertainty of a situatio...