Chomsky Noam. On Nature and Language 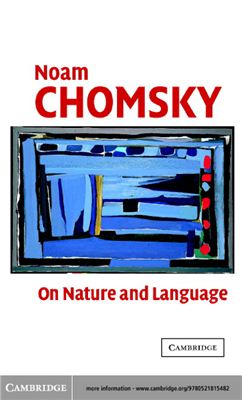 The first chapter provides an introduction to some basic con-
cepts of linguistic theory and to some elements of the history of the
fieldwhich are crucial for understanding certain theoretical questions
addressed in the following chapters.

The second chapter is related to a particular occasion.
Chomsky’s sojou in Siena was organized twenty years after his visit
to the Scuola Normale Superiore of Pisa, an event which, through
the memorable Pisa Lectures, has profoundly influenced the field of
theoretical linguistics ever since. In connection with this anniversary,
Chomsky received, onOctober 27, 1999, the Perfezionamento honoris
causa, thehonorarydegreedeliveredby theScuolaNormaleSuperiore.
In that occasion, he gave the Galileo Lecture Perspectives on Lan-
guage and Mind, which traces central ideas of current scientific lin-
guistics and of themode cognitive sciences to their roots in classical
thought, starting with Galileo Galilei’s famous praise of the mar-
velous invention, alphabetic writing, which allows us to communi-
cate with other people, no matter how distant in space and time.
The Galileo Lecture is published here as the second chapter.

The third chapter is focused on the relations of the study of
languagewiththebrainsciences; it addresses inparticular theperspec-
tives for an integration and unification of the abstract computational
models,developedby the cognitive sciences,withthe studyof thephys-
ical substrate of language and cognition in the brain. A preliminary
version of this text was read by Chomsky as a plenary lecture at the
meeting of the European Conference on Cognitive Science (Santa
Maria della Scala, Siena, October 30, 1999); the same issues were
also addressed in a somewhat more general setting in the public
lecture Language and the Rest of the World (University of Siena,
November 16, 1999).

The fourth chapter presents, in the form of an interview, a dis-
cussion on the historical roots, concepts, and ramifications of the
Minimalist Program, the approach to language which took shape un-
der the impulse of Chomsky’s ideas in the course of the 1990s, and
which has progressively acquired a prominent place in theoretical
linguistics.

N. Y. : Cambridge Univ. Press, 2006.— xviii, 190 p. This is the long-awaited third edition of Chomsky’s outstanding collection of essays on language and mind. The first six chapters, originally published in the 1960s, made a groundbreaking contribution to linguistic theory. This new edition complements them with an additional chapter and a new preface, bringing Chomsky’s influential approach into the twenty-first century. Chapters 1—6 present Ch...

In this profound work Noam Chomsky discusses themes in the study of language and mind science. This edition includes a new and specially written introduction by James McGilvray, contextualizing the work for the 21st century. All the French and German in the original edition has been translated, and the notes and bibliography have been brought up to date.

Chomsky Noam, Aspects of the Theory of Syntax

Cambridge, MA: The MIT Press. 1995 The Theory of Principles and Parameters. A minimalist Program For Linguistic Theory. Categories and Transformations.

Whether you are studying education, languages, psychology, anthropology, English, or teaching English as a Second Language (TESL), AN INTRODUCTION TO LANGUAGE, International Edition, offers the information you need in a clear and descriptive manner that assumes no prior knowledge of linguistics. The Nature of Human Language. Grammatical Aspects of Language. The Biology and Psychology of Language. Language and Society.

Jackendoff Ray. Patterns In The Mind: Language And Human Nature

Publisher: Basic Books. Publication date: 1995. Number of pages: 256. Format / Quality: DJVU. From Library Journal. In the late 1950s, Noam Chomsky revolutionized linguistics by proposing that the infant's ability to learn language cannot be explained by simple learning principles but is dependent upon the existence of complex, innate mental structures. Jackendoff explains the current state of Chomskyan theory by organizing his book around the qu...

Fundamentals of Philosophy Pages: 412 Publisher: Routledge, Second Edition (This edition published in the Taylor & Francis e-Library, 2007.) Quality: good: pdf This engaging and accessible introduction to the philosophy of language provides an important guide to one of the liveliest and most challenging areas of study in philosophy. Interweaving the historical development of the subject with a thematic overview of the different approaches t...

The Prehistory of Language (Ed. by R. Botha and Ch. Knight)

'When, why, and how did language evolve? ' 'Why do only humans have language? ' This book looks at these and other questions about the origins and evolution of language. It does so via a rich diversity of perspectives, including social, cultural, archaeological, palaeoanthropological, musicological, anatomical, neurobiological, primatological, and linguistic. Among the subjects it considers are: how far sociality is a prerequisite for language; t...