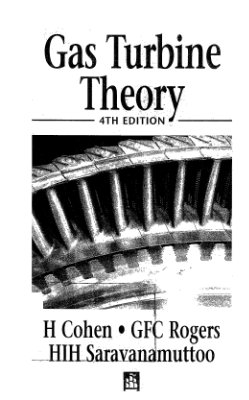 4-th edition
Longman Group Limited, 1996. – 455 p.
ISBN 0-582-23632-0
Since the third edition in 1987, the gas turbine has been found to be suitable for an increasing number of applications, and this is reflected in the new Introduction. Gas turbines are becoming widely used for base-load electricity generation, as part of combined-cycle plant, and combined cycles receive more attention in this edition. With the increased use of gas turbines, control of harmful emissions has become ever more important. The chapter on combustion has been enlarged to include a substantial discussion of the factors affecting emissions and descriptions of current methods of attacking the problem. A section on coal gasification has also been added. Finally, the opportunity has been taken to make many small but significant improvements and additions to the text and examples. As in the third edition, no attempt has been made to introduce computational
methods for aerodynamic design of turbomachinery and the treatment is restricted to the fundamentals; those wishing to specialize must refer to the current, rapidly changing, literature. Readers wishing access to a suite of performance programs suitable for use on a Personal Computer will find the commercially available program GASTURB by Dr Joachim Kurzke very useful; this deals with both design and off-design calculations. The way to obtain this program is described in the rubric of Appendix B.
Смотрите также

Справочник
4th Edition. CRC Press, 2009. 450 p. ISBN:1439801916, 0881736139 This fourth edition of a bestseller provides a fundamental understanding of the operation and proper application of all types of gas turbines. The book explores the full spectrum of gas turbine hardware, typical application scenarios, and operating parameters, controls, inlet treatments, inspection, troubleshooting, and more. It includes a new chapter on gas turbine acoustics and...

Elsevier Science Ltd., 2003 - 230 p. ISBN: 0-08-044273-0 This book describes the thermodynamics of gas turbine cycles. The search for high gas turbine efficiency has produced many suggestions for variations on the simple open circuit plant.

Linke-Diesinger A. Systems of commercial turbofan engines: an introduction to systems functions

Springer, 2008. 239 p. ISBN 978-3-540-73618-9 "Systems of Commercial Turbofan Engines" gives the reader information about the operation of the engine systems, its components and the terminology used throughout the industry. The engine systems are explained by the use of examples from today`s engines. So the readers, from aircraft mechanics to commercial pilot, become familiar with the current technology in this field and attains a deeper knowled...

Third Edition American Institute of Aeronautics and Astronautics, Inc., 1998. 459 p. ISBN 1-56347-241-4 The revised and enlarged text of Aerothermodynamics of Gas Turbine and Rocket Propulsion by the late Gordon C. Oates, published in 1988, continued to fulfill the need for a comprehensive, modem book on the principles of propulsion, both as a textbook for propulsion courses and as a reference for the practicing engineer. The original edition of...

Rolls-Royce. 1996, 292 с. ISBN:0902121235 This book has been written to provide a simple and self-contained description of the working and underlying principles of the aero gas turbine engine. The use of complex formulae and the language of the specialist have been avoided to allow for a clear and concise presentation of the essential facts. Only such description and formulae, therefore, as are necessary to the understanding of the function and...

Справочник
A Handbook of Air, Land and Sea Applications Gas turbine engineers in all sectors, disciplines, and specialties, who looked at the draft, have told me they found its contents useful. Just as importantly, they gleaned information from others’ applications. So besides imparting applications and basic design knowledge, this book is meant to get readers to think across disciplines, across land, sea, and air to the heart of this emanding, powerful and...

Rolls-Royce plc 1986 Fifth edition. Reprinted 1996 with revisions. 292 p. ISBN 0902121 235 This book has been written to provide a simple and self-contained description of the working and underlying principles of the aero gas turbine engine. The use of complex formulae and the language of the specialist have been avoided to allow for a clear and concise presentation of the essential facts. Only such description and formulae, therefore, as are nec...